Song of Drums and Shakos AAR #2

Trotted out the Song of Drums and Shakos rules and my Perry 1/56 figures for some more Napoleonic skirmishing!

Belgium in the summer of 1815 was in a state of anxiety. A large portion of the populace looked to France where Napoleons return excited in them with the prospect of reunification with that great country whilst the majority feared the return of the ‘Ogre’ would result in their subjugation!

Given a temporary command of a crucial supply train, Captain Neudegg found himself daydreaming as he trudged along a dusty Belgian road on that cool June morning surrounded by his small detachment of redcoats. Little did he know that the rising sun that warmed his face not only brought on the day but the French army! It was Sergeant Harrison on noticing movement in the distance roared ‘Oi Frenchies!’ The Captain was stung into action this was not going to be the leisurely stroll he expected…

Lieutenant Williams a grin on face and his shako at a jaunty angle pointed out to second in command Sergeant Coppelois the rag tag column of redcoats approaching them. He leaned close to his NCO and mumbled his orders in an outrageous French accent to the Sergeant. Taking in his task Coppelois sneered in that typical French manner, sucked hard on his half smoked Gitanes and then discarding it scurried off rally his charges. Minutes latter a force of battle hardened Voltigeurs and Fusiliers set off to beset the unsuspecting British!

Captain Neudegg and his column escorting the vital supply train 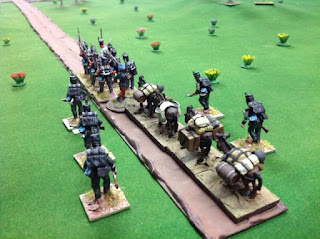 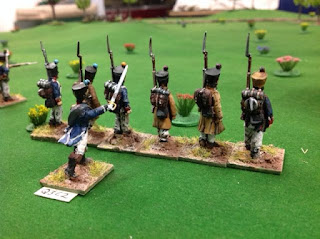 French Sergeant Coppelios and his Voltigeurs 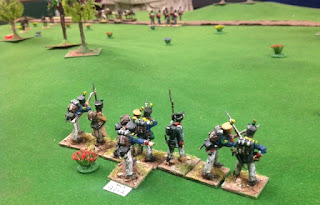 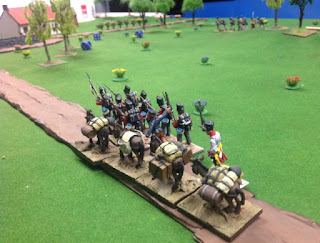 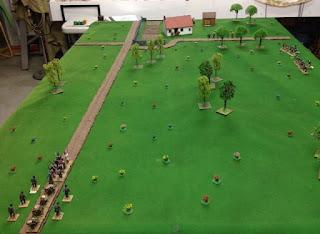 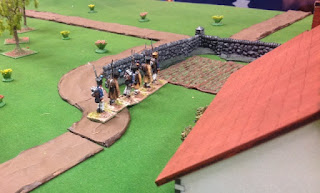 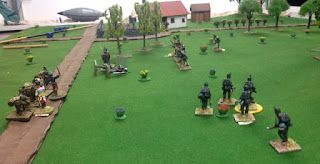 Coppelios Voltigeurs open fire on the British and draw first blood, their uncannily accurate shooting knock out two Redcoats and force three to hit the ground! Little did anyone know this event really decided the game the British were delayed at this point for four turns and came under fire from both French sections! 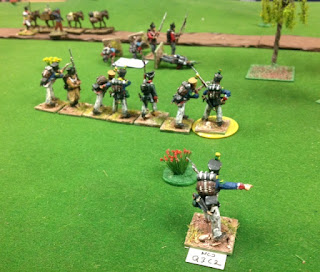 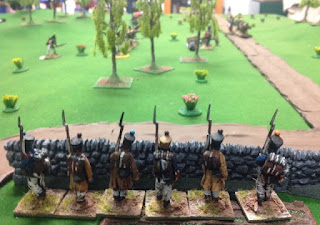 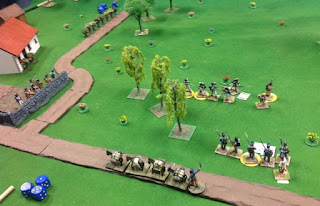 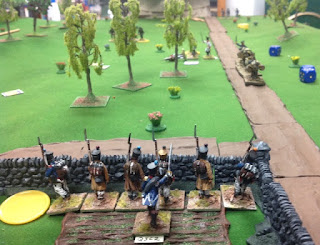 Finally the British Riflemen come into play and helping the line troops put the French light infantry to flight, here they are seen withdrawing. The riflemen ended up inflicting over 50% losses on the Voltigeurs after which they were rendered ineffective for the duration of the game 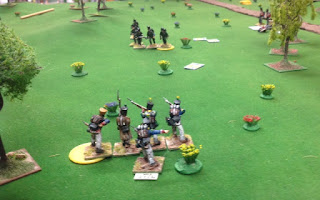 The French at the wall in turn inflicted more losses on the British Infantry and they too struggled with morale and turned tail and headed toward the rear. The Riflemen tried a desperate final lunge to distract the French and allow the supply train to slip past them... 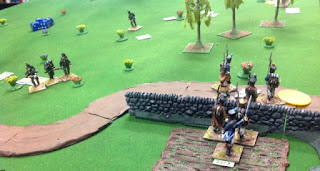 ...they failed and the slow supply column was ripe for the picking! 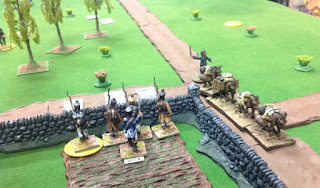 Captain Neudegg his Redcoats retreating an all looking hopeless aided the Riflemen and charged the French Infantry, he was promptly cut down! 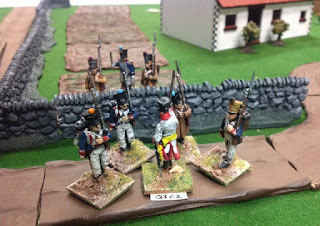 To complete the British defeat a French Infantryman killed the teamster, the supply train was in French hands 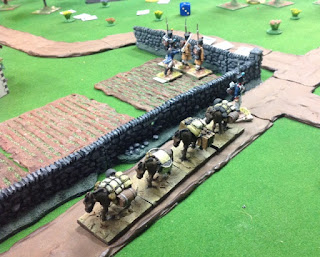 A British defeat, they suffered 8 casualties and the teamster while the same number of Frenchmen were felled. The Voltigeurs and Redcoats both with over 50% losses were struggling as their morale collapsed.

The game showed that volley fire when you can employ it is the way to go!

These are my favourite Napoleonic skirmish rules! Planning to get a four player game with much larger forces on the table soon!

Thanks for checking the AAR out!
Posted by Captain Darling at 10:38 pm