Its winter, its Wednesday, its dark and its cold so Dave and I decided what better course of action than to venture out and take part in a Chain of Command game at the Group North club room!

We've played CoC several times and are enjoying using them but have steered clear of using armour to nail the infantry rules. Bring in Group North, they were playing some 'big CoC' featuring multiple AFV's so we took the opportunity to avoid reading the rules and see how they work in play!

The figures and vehicles available to us looked great the paintwork on them were very good. The German Jump Off points were nice little 'mini dioramas'!

It was a meeting engagement between late war German and USA forces. A regular Yank infantry platoon with three tanks went up against a German FJ platoon with 3 AFV's. The German force was stronger than the US one but only deployed two out of its three sections during play evening the odds a bit. Initially the US tanks hammered the German foot but then the German tanks came into play relieving some of the pressure. The mass of German LMG's that the FJ's had on hand hammered the Yanks taking a fearful toll as they advanced... but unfortunately the game did not play to fruition ending with the USA Force Morale teetering while the Germans remained at their starting level. So the Jerry forces held the upper hand and since Dave and I helped play them a victory for TSOG!!!

Thank you to Group North for putting up with us! 😃

My FJ section advancing against the Ami's....unfortunately they were to come under withering fire from tanks and infantry and retired losing four out of ten men... 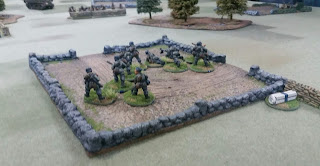 Dave's FJ section in hard cover using their two MG42's to good effect...they held their ground and caused many casualties! 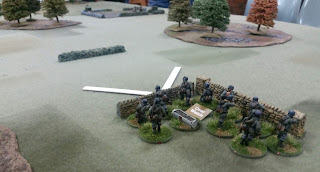 Will write up the AAR from our Monday get together next, an Oz Civil War game from our Great Antipodean Adventure campaign using the World Aflame rules...
Posted by Captain Darling at 8:14 am No comments:

This fortnight we played a Blucher Scenario, The Battle of Sacile. This is one of the scenarios on the 'oldmeldrumwargamesgroup' site...

Archduke John (large base at the centre of the right edge) orders the densely packed units of his VIIIth Corps into action against the French left wing... 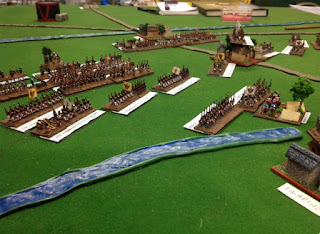 Streams featured prominently on the otherwise featureless battlefield (they were made specially for the game using the 'gap filler' technique, I'm sure I'll use them again though). The area is also spotted with several towns/villages some of which were vital to the morale of each side. The game was scheduled to run for 31 turns with both sides having 2 MO dice. The victory conditions were to break the opposing army which in this case was to destroy seven units for each side, as above each side had three objective towns/villages which if captured counted as a destroyed unit for the other side. So I foresaw a rushed terrain grab followed by a fight for the towns/villages! Here we go...

Dave took the French and during the first ten turns moved forward as fast as he could sharing his few MO pips between the two French wings but this and the and the plethora of streams slowed his advance. Meanwhile Al in charge of the Austrians deployed his (initially) fewer units rapidly into a ring to block the French advance.

On turn eleven the Austrian reinforcements deployed and this brought their army size up to roughly the same as the slowly advancing French. At this stage only one of the crucial towns/villages had been occupied and the French started to engage the Austrians but were still struggling to get all their forces into the fight.

During turns twelve to twenty-four the Austrian got the better of the individual combats that occurred. The French left were especially hard hit as the Austrian horse carried out several spectacular charges, the best of which they inflicted five hits on one French unit! The French right only managed to get half their force up to the Austrian line and they never really threatened the defenders! In fact on turn 24 the Austrian went over to the attack!

At the end end of turn twenty-four we 'pulled stumps' and called it a night we gave the Austrians a minor victory as they inflicted much heavier casualties on the French neither side actually lost a unit!

The game was good as we got back into the Blucher rules and how to use MO's but the scenario giving both sides only two MO dice a turn was far from any resolution. We will replay this but up the MO dice to three for each side to allow both sides to get into the fight quicker. This may favour the French with their initial force superiority but worth a try as in our game no real action commenced until turn after sixteen so half the game was over. All in all a good experience!


The overall tabletop. A very barren affair dominated by streams and villages. The ground gently sloped from the bottom left of this picture to the top right not enough to be of any effect at this scale. Eugene's French right wing is in the lower left corner and the right wing and cavalry will enter from the top right. Archduke John's advanced guard is near the centre of the table and a full corps is starting on the right edge... 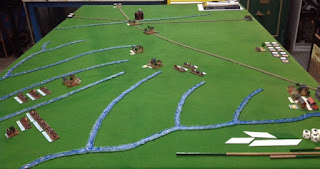 The French right slowly advanced while the Austrians rapidly established a defence centred on the towns/villages... 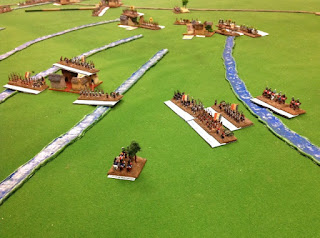 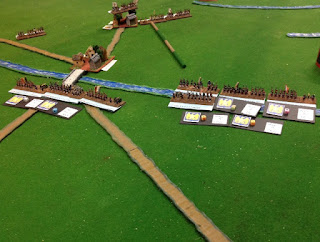 The Austrian view of the French advance... 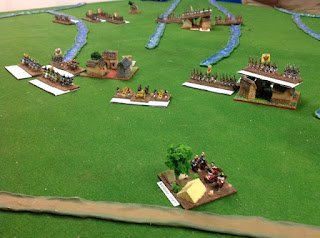 Turn 11 and the French have still yet to engage the Austrians! 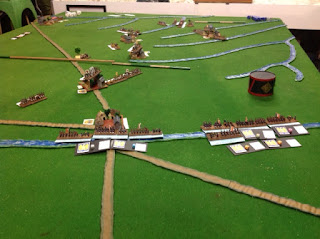 The Austrians drew first blood effectively using their cavalry on the French right inflicting casualties and slowing them even more! 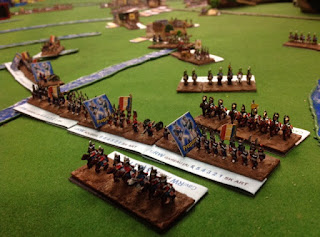 The static French right watch on as more Austrians arrive! 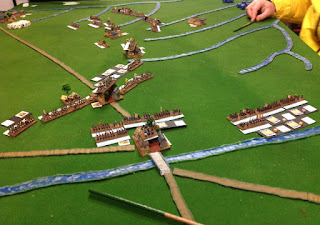 By turn 22 the Austrian were on the attack against the French right... 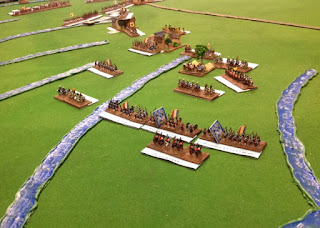 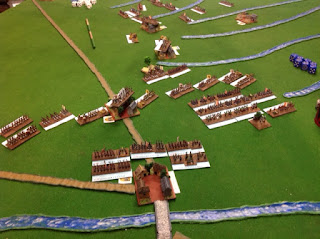 Off course the 'Dice Shako' had to be given an outing! 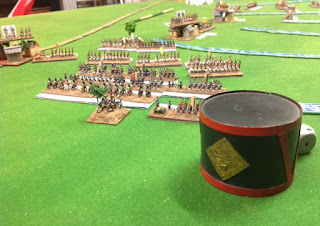 The Austrian VIIIth Corps launches a big attack on turn 24... 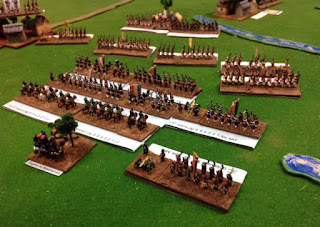 The overall view at the end of turn 24 the crescent of the Austrian defensive line can be seen and the widely separated french left and right wings is noticeable... 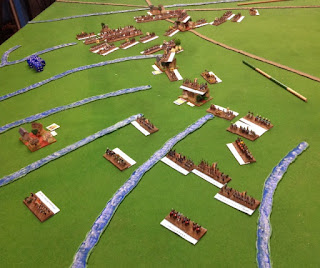 Next fortnight we are revisiting The Great Antipodean Adventure and The World Aflame rules...
Posted by Captain Darling at 10:52 am No comments:

June 20 1880; the headline of The Argus late edition reads 'Bloodbath at Glenrowan...' and  the front page of the Herald reported 'Police Incompetence Leads to Carnage at Glenrowan...'! Well they would of have if our replay of the Siege of Glenrowan was historical!

Yes we ‘Played Ned Kelly’ with game master George last Friday and we all had a hoot! As none of us had the time to play this game at Little Wars Adelaide George was good enough to host us at his man cave and run us through it!  His figures were great, his terrain engrossing and his streamlined Tribal/Brutal rules gave us a good overview of them.

After a debrief of the situation we selected our forces and were given our objectives...

Then went for it! I'll let the pictures tell the tale...


The Kelly Gang lined up in front of the Hotel and while Ned covered them Dan, Joe and Steve headed inside. The Police forces raced forward. Kelly took out one Tracker at long range and another three when they rushed him! O'Connor then flanked the Hotel (by himself!) and Hare's men advanced into cover and opened fire!
Below Ned engages in some biffo with the Aboriginal Trackers 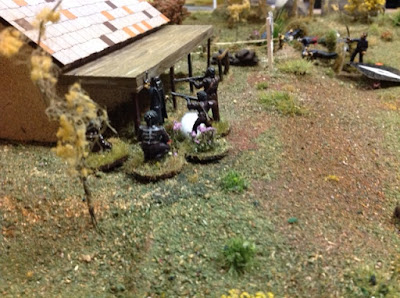 George has some great casualty markers! 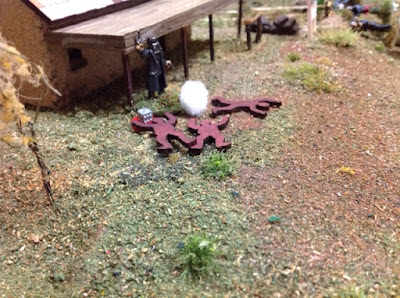 Hare's force now split half taking on Ned who still stood firm in the open (seeking Press kudos) and covering the front wall while the others moved to get around the back of the building.
In the overall picture below to the left and behind the Hotel can be seen some hostages decamping to safety, to the right of the Hotel Hare's men can be seen advancing, Ned is visible by the veranda surrounded by bodies and to the left and in front of the Hotel O'Connor can be seen on his flanking attack and the sole surviving Tracker. 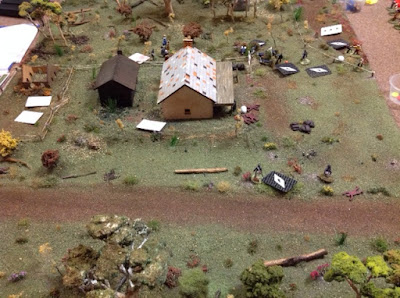 At the same time Sergeant Steele and his mounted Constables arrived on the scene encountering some hostages fleeing from the scene post haste! 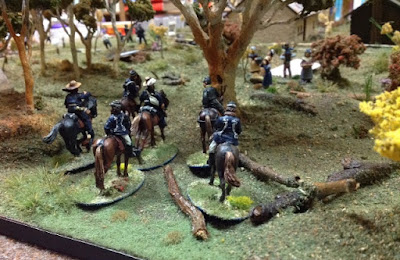 Another picture of Hare's men advancing showing off George's great figures and terrain... 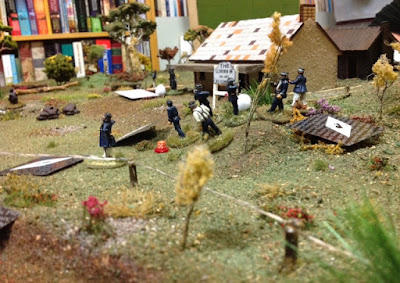 Ned defeated a couple of Hare's Constables and heavily wounded Ned redeployed (i.e.ran away) along the side of the Hotel and toward the bush pursued by Sub-inspector O'Connor. The Police engaged the Kelly Gang along the front of the Hotel pinning them while others including Steele's mounted force moved to the building's rear... 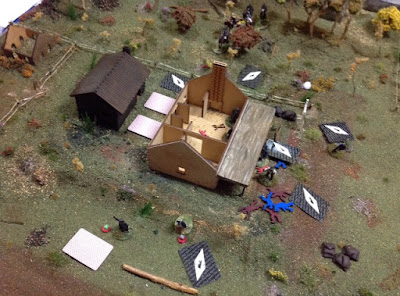 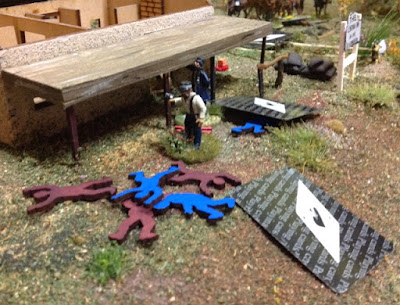 Sub-inspector Stanhope O'Connor catches up with Ned Kelly but is shot in the back by Steve Hart covering Ned from the Hotel window! Kelly survived O'Connors attack which occurred even though he was shot due to a timey whimey thing included in the rules. You can see from below Ned has six 'hits' (he can take seven and O'Connor is on four (he can take five, the fifth of which is the shot he takes from Steve Hart)... 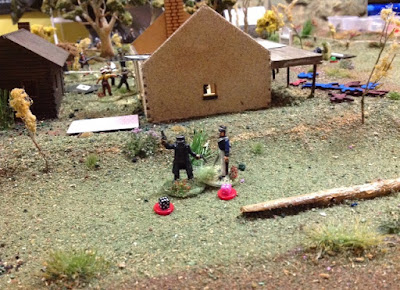 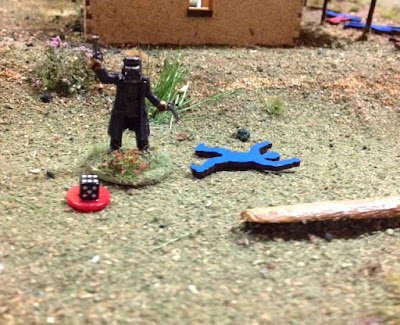 While Ned escapes, a furious fight occurs in the Glenrowan Hotel as the Gang and Police fight amongst a sea of injured Hostages (a result of Police fire into the building). Joe Byrne is killed by the swarms of Police taking a few of them with him. Dan Kelly is injured and flees from the Hotel fatally injuring Hare as he goes. Steve Hart after shooting O'Connor is engaged by Steele and his men and both sides take hits. He is overwhelmed at games end and captured.
Below Dan can be seen in the front room of the Hotel surrounded by Coppers and Sergeant Steele can be seen in the doorway heading to the bar confronting Steve Hart yelling, "You're nicked sonny!" 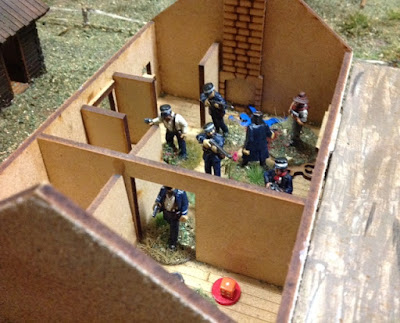 Ned Kelly makes it into the bush and is (temporarily) free! 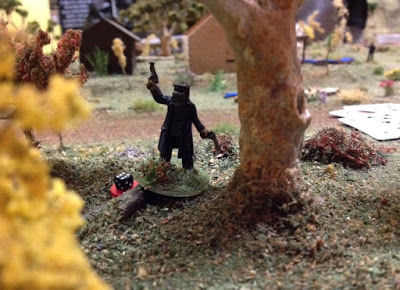 The tabletop at games end. Superintendent Sadleir can be seen on the far right apprehending Dan Kelly a few Police with Sergeant Steele are still in the Hotel and Ned is invisible in the bush at the lower edge of the picture... 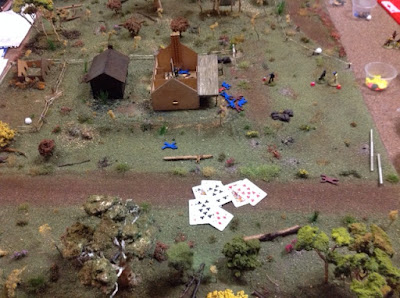 Not sure of the result really but this is how it ended;
Ned Kelly wandered into the bush severely wounded
Dan Kelly wounded was apprehended by Superintendent Sadleir
Steve Hart wounded was captured by Sergeant Steele
Hare's Force suffered appalling casualties including Hare himself
O'Connor, may he rest in peace lost all of his Native Trackers
Steele with light losses occupied the Glenrowan Hotel
The hostages suffered heavy casualties from the Police fire and a few escaped into the bush
Posted by Captain Darling at 2:56 pm No comments: