Blucher AAR - The Battle of Alexandria

We were after a a game for this fortnight so I visited the ‘oldmeldrumwargamesgroup’ site and seconded one of Ross’s fine scenarios for Blucher,I picked the Battle of Alexandria.

From the game, the British Guard in Line await the French Dragoon's second grand charge! 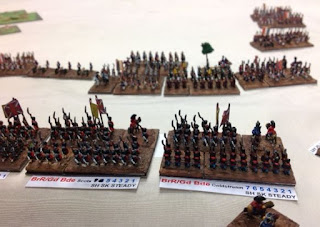 I cobbled together a tabletop, using an off white sheet, my river section to represent the coastline, some felt for a lake, painted masking tape for a dry canal and whipped up a Roman ruin BUA to complete the set up. My figures aren't 1801 period but sufficed for the game!

Overall scene of action with French on the left; the blue arrows show the path of the first two French attacks the red ones show the advance of the French right and lastly the green arrows show the last French advance and the grand ride of Finch's Light Dragoons.... 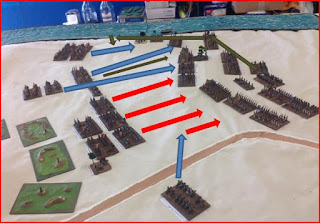 The French started of action along the coastline and for a brief moment Lanusse’s troop had control of the Roman ruins but men from Stuart’s Brigade secure it and garrisoned the position, the French wisely kept clear of it after that. While that tussle ensured the cunning Frenchies lined up their left wing for a major attack on the British centre. Roise’s Dragoon’s swept up to the British crest line and took on the British Guards who bravely faced them whilst in line. Al and I went with this tactic as even though the Guards had to re-roll their hits as infantry against cavalry they would never give up ground and it allowed them to fire!

The Dragoon’s repeated their charge and were again held off while Lanusse infantry tried to force the British back south of the Roman ruins. The stoic redcoats held and there were heavy losses on both sides. At this point the French right wing took up the cudgels and Reynier’s infantry advanced up to the British, there was a firefight a British charge and some more shooting both sides took losses but neither dealt any decisive blows. After regrouping the French left, Lanusse, Rampon and Riose launched another push up the hill lead by their heroic Dragoons. Redcoats from the Guards and Coote’s Bridages held again both sides took losses. During this action Finch’s Light Dragoons slipped around the French flank along the coastline near the Roman ruins successfully charging the 88e Ligne and dispersing them, the French left was exposed..

At this point we reached the end of turn 29 and the game was over!

Lanusse's troops drive Moore's redcoats from the roman ruins! A good start for the french! 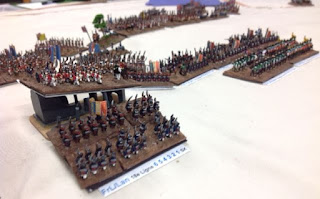 In the background Stuart recaptures the Roman ruins while the French left lines up to change the british foot guards... 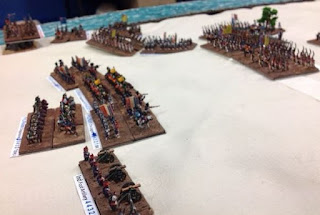 The leading Frenchmen from the 4e Legere are pushed back from the wedge they drove in the British line between the Roman ruins and the hill... 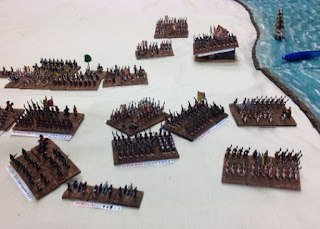 The french second charge on the British centre was repelled and Doyle's Bridge advanced, realising they were exposed to the french horse they rapidly pulled back... 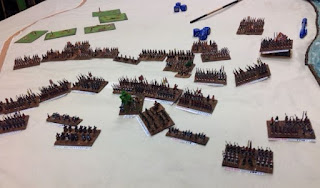 Close up of Doyle's advanced Brigade.. 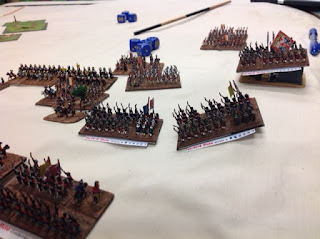 Mid game the French right can be seen in disorder and regrouping (rallying) in the top left, bottom left the French men of Reynier advance to cover them 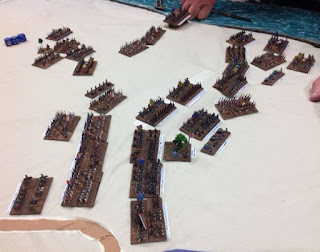 Finch's Light Dragoons late in the game ride down the 88e Ligne and are poised to roll up the French line! 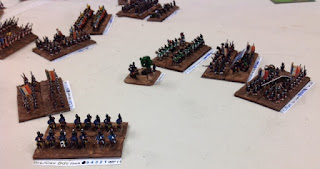 The battlefield after turn 29 with the British on the left. Finch's horsemen are in the bottom right just above Stuart's troops garrisoning the Roman ruin. As can be seen both sides units are jumbled from continual advancing and retreating. Only on the far left of the British line can three units be seen in any order abutting the corner of the blue felt...err lake. 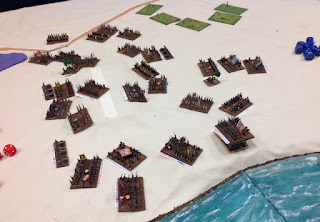 The result a draw with two British units lost and three French ones destroyed. At the end the French army was fully spent with many units down to their last fatigue point whilst most of the British units had taken heavy casualties as well. Stu’s tactics were good as he attacked and regrouped continually as the French. Al and I on the British side never were in a position to take advantage of the French as they withdrew and rested their units. We should have deployed our cavalry earlier to the coastal area where the French had left a void to be out of range of the British vessels guns. Anyway everyone enjoyed yet another round of Blucher...now which of Ross’s scenarios to pick next! Oh and I must write up the Piave AAR...
Posted by Captain Darling at 10:17 am