Our last Monday foray into gaming featured my Little Wars FUBAR VSF scenario. This game pits a Martian Tripod against a Human force featuring Armoured Steam Wagons, Guns and an Aeronautical Conveyance. The objective is simple the Tripod needs to cross the length of the board and exit from the opposite side to which it entered.

A couple of pictures of the action between the Humans and the Martian Tripod... 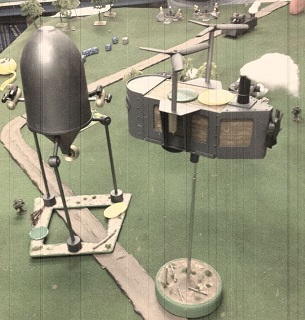 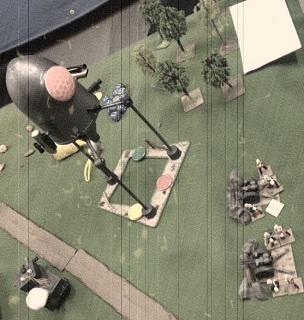 The game ended after a marathon 26 turns (that was my BAD I should have included the Little Wars restriction of 10 turns and I'll make sure I do that next time!) in a narrow Martian victory!

The historical blurb, full AAR and lots of pictures are on Captain Darling's VSF Blog...
http://captaindarlingsminiaturesemporium.blogspot.com.au/2016/06/stop-that-tripod-fubar-vsf-aar.html

Next Monday gaming night we're visiting the Napoleonic Era and the Battle of Barrosa!

Posted by Captain Darling at 5:50 pm No comments:

Well the Blucher Rules involves keeping Momentum Dice hidden in a 'small opaque cup' so in my quaint style of always over doing things I thought I have two hours to spare, some PCV pipe, some 0.5mm styrene sheet, some super glue and tools let's do something better than a 'small opaque cup'...
Here's what resulted, please note the hand model is my partner notice her impressive cuticles... 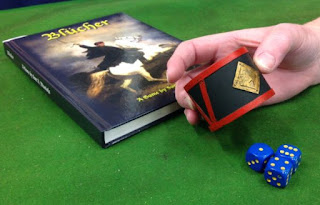 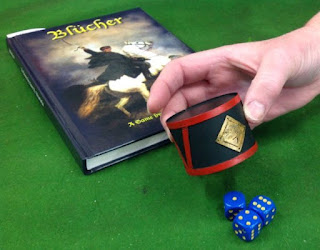 Here's a couple of pictures of the piece sans paint... 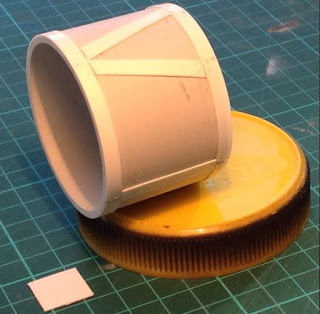 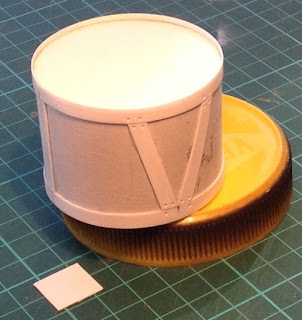 Here's some close ups of the finished item...I didn't over detail this I could have added chinstrap 'buttons' and cockade and brim etc but in the end this has to be a servicable item and I don't want anything fragile on it! 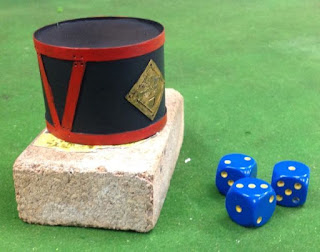 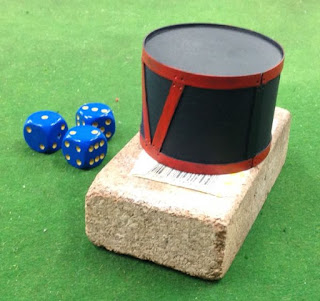 Cheers all!
Posted by Captain Darling at 10:32 pm 5 comments:

Email ThisBlogThis!Share to TwitterShare to FacebookShare to Pinterest
Labels: Blucher

With my 1/56 village buildings all done and the roads/paving sorted I just need some suitable Victorian town like fencing which can also double as a cemetery fence for my Renedra tombstones. I looked at the various kits/sets of wrought iron fencing available in 1/56 and decided to go with an MDF set from a Polish seller on ebay. The posts are cut into 3mm MDF and the wrought iron sections into 1.5mm MDF. For $20 Aussie dollars including postage I got just under a metre of fencing with a nice gate section. There's a bit of assembly required for the posts and I used a bit of filler on the tops and sides of them to give a bit of texture and hide some of the bigger joints. Once they were done the fence sections fitted nicely into them. I think it's a bit fragile made up as I have in sections so I can change the layout but if glued all the way around to make a fixed structure it would be quite albeit I suspect hard to store!
Here's some pictures of the finished product with my Renedra tombstones but it can be reconfigured as required... 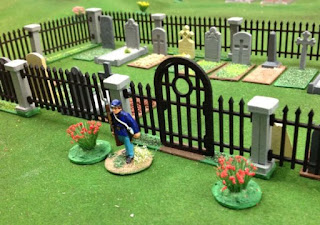 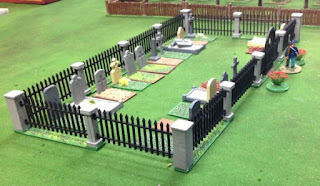 Posted by Captain Darling at 9:13 pm No comments:

Well this fortnight with the Wings of Glory rules fresh in our heads we spent another night soaring over the trenches of the western front thumbing our noses at fellow knights of the sky and watching for the 'Hun in the Sun' all while wearing silly cotton wool moustaches!
We started the gaming with a two plane each free for all and then ran the 'Catch that Gotha' scenario three times so each one of us had a chance to fly of the Hun bomber against two Sopwith Camels, that went two games to one in favour of the British!
In the true spirit of the night Alan brought a pack of Pods Chocolates so we could all say..."Chocks Away!" is silly british accents! Here you'll see if our free for all game my Fokker Dr1 is the first of the six planes in action down! 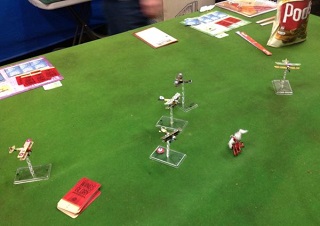 At this point of the free for all I was the rules man as both my planes were out of action and Alan was one plane to Dave's two..uh oh! 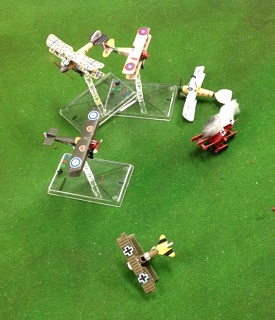 We will go back to these rules again in the future as I have the large Zeppelin and Handley Page bombers and we want to give them a spin!
This Monday night as it's the Queen's Birthday Public Holiday we shall be going with the 'Queenie' theme and all dress up as dowdy old ladies no no no...I mean we'll play a (Queen) Victoria(n) Science Fiction game with the veritable FUBAR VSF rules while supping on Corgi Kebabs and sipping sherry!
Posted by Captain Darling at 8:51 pm 1 comment: