Last Monday we again revisited The Great Antipodean Adventure campaign and the A World Aflame Osprey rules. In this game Unionist forces try to relieve a detachment of Federal infantry from the 30th Battalion of the 18lb cannon that the All Australia Party and the Anglican League failed to secure during the skirmish on May 20 in Beaconsfield Park... 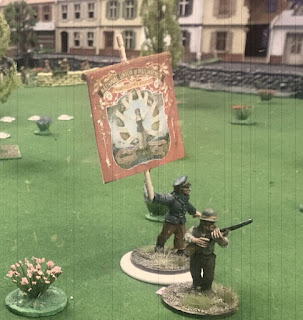 The Second Battle of Beaconsfield Park

The skirmish at Beaconsfield Park Sunday May 20 ended with the All for Australia Party’s men in possession of the 18lb cannon they had sought. Next day still saw the gun in the Park as the 2nd Sydney Regulars were not able to successfully move it due to vehicle issues. Late in the afternoon Australian Federal Army troops of the 30th Battalion arrived and demanded the ‘insurgents’ turn over the weapon. In the face of well armed and trained infantry Captain Beatty succumbed and turned over his prize and withdrew his force.

At this point the cannon had already been hauled to the Queen Street side of the Park well away from the previous day’s action. Captain Smith ordered his men to set up a defensive perimeter around the old artillery piece all the while wondering why on earth anyone would try to use it in action after all it had been sitting in the elements for the best part of 15 years. The infantry of the 30th Battalion were aided by a section of Engineer Reservists.

Two days later on Wednesday May 23 a limber was too arrived in the evening to recover the big gun so the men of the 30th prepared to dismantle their defences and head back to the comfort of the barracks. Their work was interrupted just after 4:00pm as a local Landlord arrived with the news that a unruly Union Mob was on their way and they were looking for a fight!

Captain Smith ordered his men to stand to and prepare for action he then sent a runner for assistance unaware of the Mobs strength. He secretly hoped the sight of regular infantry would dissuade them from action.

Only a few hundred yards away fired up Unionists planned their attack on the Federals and claim the big gun. Their leaders Comrades Belt and Buckle had served in the Great War and knew the gun itself was of little value but as their Soviet advisers said a defeat of Government Soldiers would be a great boost to their cause and add fuel the rebellion. They planned a pincer attack and had the support of an Armoured Crossley truck so were confident, Belt and Buckle synchronised their watches and announced to their members the attack would begin at 4:00pm. One wag replied we’ll have to finish them quickly before the local Publicans call last drinks! There was a roar of laughter and the Unionists shuffled off to their assigned positions...

To clinch victory the Unionist must secure the 18lb cannon by having at least 4 figures adjacent to it at the end of the game or breaking the Army units, the Federal side must prevent the above.

Each Union Bannerman once during the game may 'rally the lads to the banner' and allow a reroll of a morale die throw.

Due to heavy rain before the action figures may only run for one turn then walk again.

The Army HMG has 12 Volleys.

The Army ATR has 7 Volleys.

The random events were updated from the previous games and listed using a regular card deck to regulate.

Once again I'm going to let the pictures tell the tale here with some inspiring captions!

A view of the battlefield, the buildings are on the southern side of Beaconfield Park. The Unionist are advancing feom the west toward the army's entrenchments. 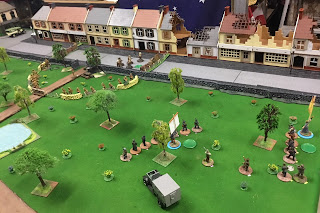 The Mobs from the east run forward for all their worth! 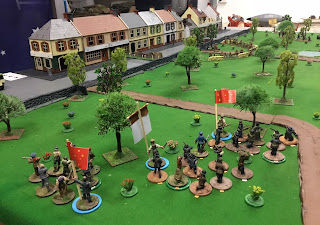 Casualties mounted quickly as the Army's Vickers MG mowed down the Unionist! The silver skull tokens mark the spot where men and women fell! 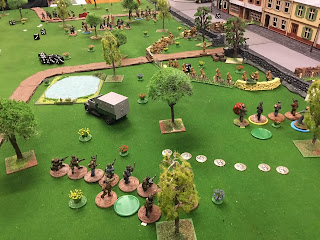 The advance from the west only faced musketry so closed with less losses... 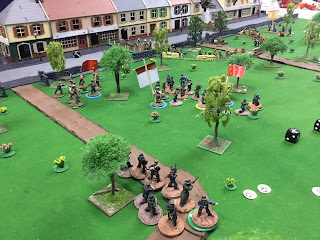 Overview at the end of Turn Three it was already obvious to all the attack was doomed! 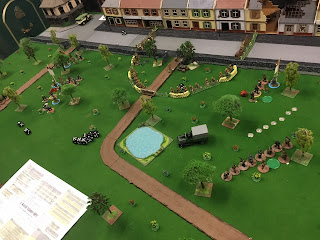 Turn Four and a Mob reached the Army's line but were beaten back! 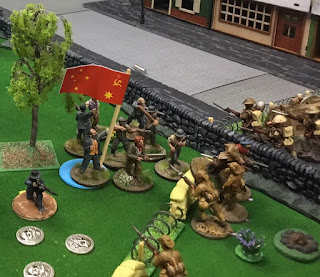 Turn Five and a last attempt was orgabised to breech the defences! 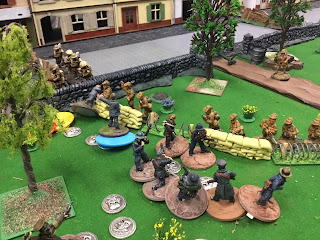 Meanwhile with all three Mobs attacking from the west broken their Armoured Truck tried to divert the Army's attention from the advance from the west... 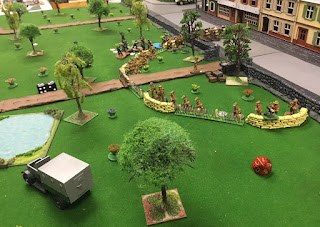 ...however a hit from the ATR although did not destroy the vehicle caused the occupants to bail out, here they are cowering behind their Cossley and out of the action! 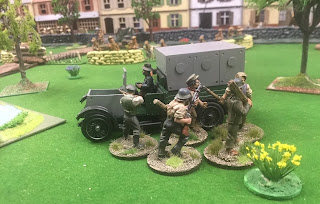 The final action of the battle was a last gasp lunge at the Army emplacements by the only remaining intact Union Mob...they were soundly beaten in the resulting melee... 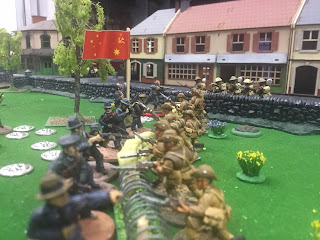 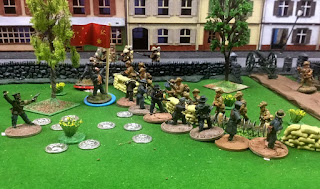 It was an easy victory to the army! they suffered 2 casualties to the 30 plus the mob endured! The 18lb gun was never in danger of falling into the hands of the masses!

Well this turned into another bloodbath…especially if you were a member of the Unionist Faction! My prediction from the summary of the first game of this campaign that the Mobs would need better tactics than frontal charges to succeed proved prophetic! The Mobs charges against emplaced regular infantry with a Vickers MG were disastrous and heavy casualties were taken with only 2 out of 7 sections reaching the emplacements at which point they were dealt with easily by the Army lads. The armoured Truck was close to useless armed only with rifles and the ATR dealt with it easily! We discussed the activation rules in depth after the game and may try something a little different next time…
Posted by Captain Darling at 4:47 pm