Daggs Starlifter watched nervously as the senator’s shuttle lumbered away from the battle. The Corellian vessel was as tough as they get, but slow as a three-legged nerf and couldn’t defend itself against a tad-moth. A single snub fighter to protect Her Ladyship was never going to be enough, but Daggs was all that was left after the Empire ambushed the senator’s corvette. Slipping unnoticed away from the battlefield's wreckage seems like a slim hope, but it was better than none at all.

A warning light started blinking on the long range scanner and the astromech decoded it as two Tie fighters approaching dead on. Powering up the X-Wing’s S-Foils, Daggs accelerated to attack speed and radioed the pilot of the shuttle to stay as close as possible and undertake evasive manoeuvres. This was going to be a tough fight.

Monday night’s game saw a single X-Wing defend a heavily shielded shuttle carrying Senator Camilla against two Tie fighters. For the Rebels to win, the shuttle had to exit the opposite side of the table. The Empire must not let the senator escape alive.

We played two games and swapped the role of the Rebels for the second game. Game one saw Al playing the rebels and Dave and Pete each took a Tie fighter. Charging at full speed towards their quarry, the Ties quickly closed to within range, deciding to try and take out the X-Wing first. Jinking to the left, the X-Wing took a burst of fire to its starboard side but the shields held and no damage was done. The shuttle powered on steadily into the midst of the approaching fighters, relying on its shields to buy it enough breathing space to escape. 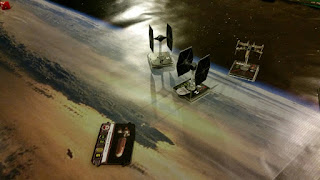 It wasn’t long before the Tie pilots realised that the X-Wing was a tough beast and wasn’t going to go down quickly so they turned their attention to the shuttle. Shot after shot hit the ship, gradually whittling down its shields. But the X-Wing was hammering at the attackers as well to try to keep them at bay. With limited mobility and a lumbering gait the shuttle inched close to safety until just before it reached its objective – with all of its shields gone and its hull almost breached, the X-Wing scored a direct hit on one of the Ties and the shuttle was home free.

A narrow victory for the Rebels.

Game two saw much the same result with Dave as the Rebel pilot, but this time the Empire decided to focus all of their attacks on the shuttle and ignore the X-Wing. This meant that the X-Wing could manoeuvre without any real regard to drawing fire from the Ties, but the close quarters of the combat meant that ships were bumping into each other.

A second victory for the Rebels, with less damage done to the shuttle, but both Ties intact at the end of the game.

Fun for all, with lots of cheesy sound effects and some truly dreadful puns.
Posted by Dagster at 9:48 pm

Email ThisBlogThis!Share to TwitterShare to FacebookShare to Pinterest
Labels: X-Wing