Well I'm still catching up on posting old TSOG related stuff but now I'm time rich as I'm 'a bit unemployed' I'll get up to speed in no time. So you're all probably sick to death of Sixty-One Sixty-Five ACW posts so I'm putting up a report on the Road Trip Al, Dave and I took earlier this year to Little Wars Melbourne 2018.... 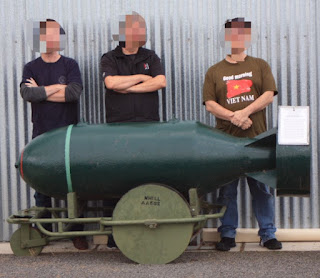 As dawn’s first light crested the Adelaide Hills, three brave adventurers set forth on a trek across the wilderness to explore the mystical land of “Victoria”. With their breath frosting in the early morning air, rugged up against the chill, SA’s finest loaded their wagon with supplies to sustain them as they headed eastwards. The rush to get ready was evident from the splash of blue toothpaste still drying on Dave’s cheek. The question had to be asked... Was it just toothpaste, or was it actually Avatar sprog? Thus the tone of the trip was set.

Melbourne Little Wars 2018 was our destination - those poor bastards had no idea what was about to hit them (spoiler, we were very well-behaved and only argued with one local all weekend, and we only called Al “Stu” once).

Al had promised to build a model of a volcano to be used as the centrepiece of a prehistoric dinosaur race (yes, really). So that was loaded in the boot carefully and off we went.

The drive itself went pretty quickly - 750km seemed to fly by. We stopped for lunch at the Ararat Hotel (a wonderful art-deco building known locally as ‘the Rat’). An excellent counter meal (a schnitty of course) and a local brew later and we back on the road for the final leg.

We stayed at the Sandbelt Club hotel, which is not too far from LW’s venue - comfortable enough and cheap. An early morning and long drive took its toll and we all crashed around 9:30pm.

Another early morning though, and damned cold at that - 3C - and off we drove to the venue. Alan set up his table while Dave and Pete scoped out the traders and the Bring & Buy tables. Many hugs (manly ones of course) and handshakes were had with old friends. Well, Al’s old friends. Pete and Dave knew nobody there.

The hall was bustling early and around 20-25 games were in full flight by 10:00am. The traders tables were packed and the Bring & Buy was three deep with people looking for bargains. Everything was clicking into place for another excellent event.

Our lads were contributing to the local economy by emptying their wallets, refilling at a nearby ATM, and then emptying them once more. Dave managed to fill in some gaps in his 20mm North African WWII collection, Pete picked an absolute bargain of ACW figures, and Al got himself a new airbrush and compressor, plus a swag of WWII figures from his friend Boz. The car was filling rapidly with our haul of loot!

But the games... Al’s dinosaur race game was very popular, being run 5 times during the day. The average age of the players was around 8 however. Dave and Pete played a Bolt Action game and a lovely looking 54mm DBA game. One table that caught everyone’s eye was the Wings of Glory multi-player game. The interlocking, sculpted game mat was beautiful and, amazingly, was added to during the day - starting off with the fields and villages of France for a WWI game, later on new sections were added with the coast and English Channel for a WWII game. 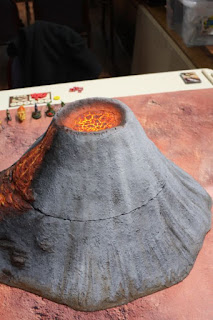 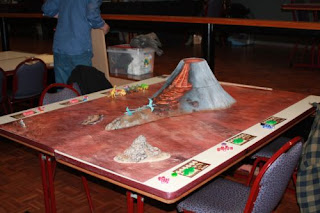 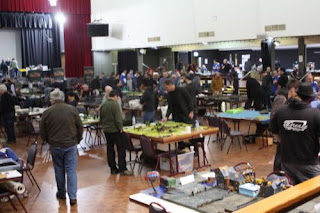 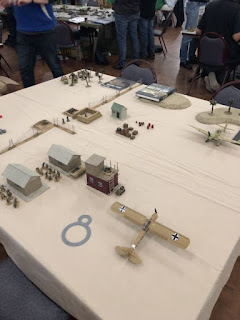 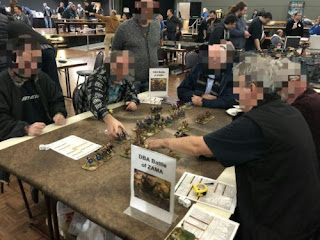 Another standout was the game Twisted - a steampunk skirmish game designed and produced entirely in Australia. The production standards and quality were world-class and Pete had a game of it with the author.

The day finally drew to a close, leaving us worn out and footsore, and very much appreciating a lovely beer (thanks Nic) at a local art-house brewery.

Sitting with the organisers of the event and joining in the post-mortem was interesting, and gave us opportunities to add the ‘voice of the customer’ to the conversation. This was the point at which the disagreement occurred, but thankfully it didn’t escalate.

There was however a sneaky nudge to get us to organise the Adelaide version of the show. Hmmm.

But all beers must come to an end and we piled back to the Sand Paper Club to unload our stash and find somewhere to eat. Big Pig - oh yeah! Best ... ribs ... ever. But we drank them out of stout and another beer I forgot the name of. So (swaying now) we made it on foot to the hotel, joking along the way about blue sprog and sand paper (it all made sense at the time). It was time to survey the haul of cardboard, resin and lead piled up in the room. The many, many copies of Strategy & Tactics ought to keep Dave and Pete busy for some time to come.

An amazing day it was. So a huge thank you to the organisers (Dave, Mike and Nic), all the volunteers who helped run the day, and to the game masters who brought such energy and enthusiasm to their games.

We chose to extend our stay in the city since Al had some business to attend to. Pete and Dave went off to explore the Camberwell Market and visit the Shrine of Remembrance, while Al took off for a working breakfast with a client (hungover somewhat).

Not much to say about Sunday really, except that we did find a wargaming shop open in Ringwood that was just freaking amazing (link). If you’re in Melbourne and into wargaming, visit the House of War.

Fitting everything into the car along with the volcano was a bit of a jigsaw puzzle, but it was under control. Heading off home in the Monday morning peak hour was a little harrowing, but Pete’s expert navigation saw us onto the Westgate Bridge easily enough. Having SA number plates seems to ensure all the locals give you a wide berth.

On the way home, we followed a sign saying ‘historic RAAF base’ just outside of Nhill. Dave, being ex airforce, and Pete being a military buff, were keen to explore. Al, always the cynic, thought it would be little more than a sheep paddock and some crumbling concrete slabs.

Wrong! This was absolutely the highlight of the trip. The airfield is still in use by the Nhill Aeroclub and there are two hangars there. One is a WWII vintage hangar in excellent condition, and the other is newer but has been set up as an aviation museum. We got there a little late in the afternoon and it was closed, but Len, the curator, came out and asked if we wanted a tour. Damned straight we did! There were three WWII aircraft inside the hangar - an Avro Anson undergoing restoration, a Wirraway in immaculate condition, and a Tiger Moth also in great condition as well as some very rare training simulators from the period - in working condition! Len’s enthusiasm and local knowledge made the tour all the more personal and enjoyable. Thank you so much. 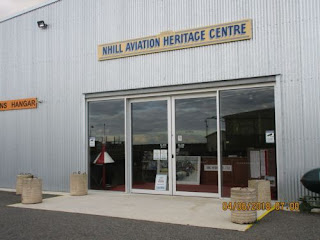 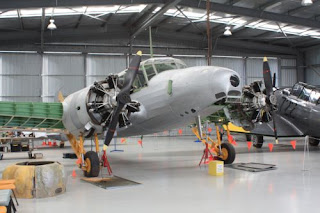 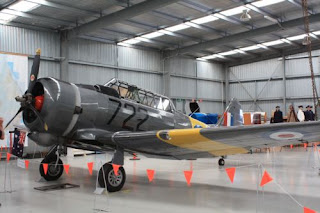 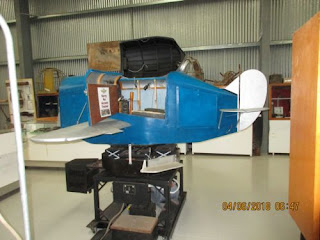 We spent an hour and a half there and were just blown away at this hidden gem. We will definitely stop there again on the way through next time. (Link)

And that was the final noteworthy event on our journey. A fun, safe, and thoroughly enjoyable trip and one we all want to do again next year.