Song of Drums and Shakos AAR #4

This fortnight we played the second Scenario featured in the More Song of Drums and Shakos rulebook, Reinforcements. Al and I took command of the colourful Ottomans and Dave led the Russians. Last time the Russians were given a bloody nose by the Bashi Bazouks in the Convoy Escort Scenario. This time Russians were defending a strong central position with a small force but knowing reinforcements were close at hand. The Ottomans have an advantage in numbers, 22 to 15 but the ill disciplined and untrained Bashi Bazouks would need all their courage to win the day!


The height of the action a crazed Bashi Bazouk tries to tackle the besieged Russians... 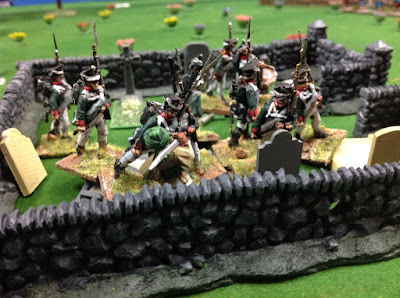 August 1810
Captain Popoff withdrew toward the Russian Supply Depots after his supply convoy was intercepted. He and Sergeant Putin gathered scattered Grenadiers and Musketeers and formed a strongpoint around a small walled cemetery hoping to halt the advancing Otomans.
Meanwhile Bashi Bazouk leaders Yildiz and Arslan and their men were elated after looting the Russian supply train. They gathered even more Bashi Bazouks and pressed forward knowing more Russian booty was before them!
Pressing forward the Ottomans ran straight into Captain Popoff’s strongpoint, Yildiz and Arslan decided there was only one thing for it…they ordered the charge!

Turn 1 started badly for the attacking force as Boluk-bashi (Leader) Arslan failed all his initiative attempts and the strongest Ottoman group straggled onto the table. Boluk-bashi Yildiz fighters also affected by poor activations just struggled onto the battlefield! Meanwhile the Russian deployed to face the attackers while a couple of extra soldiers sprinted toward the walled cemetery. 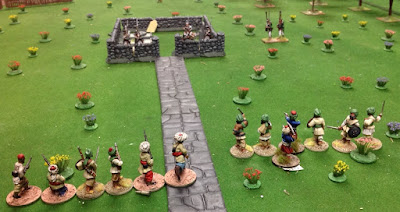 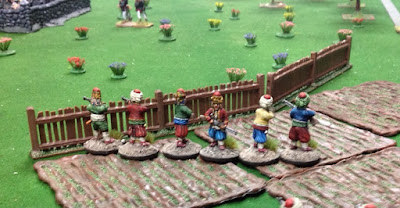 Turn 2 the Ottoman main attack picked up the pace and closed in on the Russians, their fire support finally got organised and would be ready to fire next turn. The defenders fire caused no casualties on the attackers! 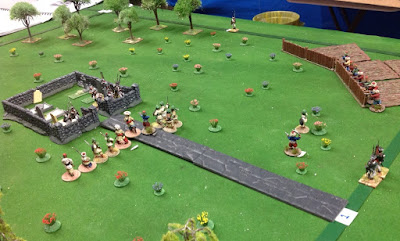 Turn 3 saw the action heat up but also saw confusion! A couple of straggling Russian infantry entered behind the Ottomans while the leading Bashi Bazouks out paced their Leader and were unable to act as a united force.

Turn 4 and the Turks after some ineffective fire closed on the Russians and engaged them in hand to hand combat. Initially the Ottomans did well but a Bashi Bazouk was then knocked down and suffered a 3 to 1 loss in the close combat...disaster...being 'green' all the other Bashi Bazouks that saw this event had to take morale checks and most fled! The Russians were jubilant even though they lost their two stragglers and a reinforcement to the Ottomans. 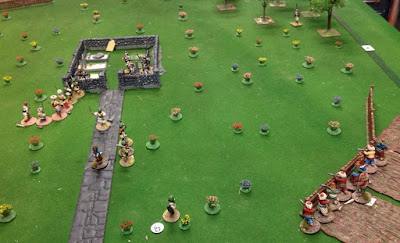 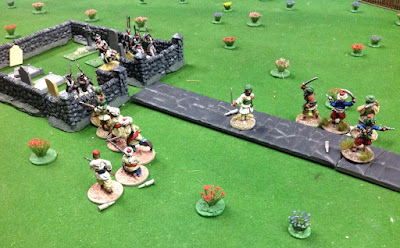 The Turkish Musketeers kept up hot fire, the results varied turn by turn...

Turns 5 and 6 saw the OIttomans try to close on the Russians and engage them and at one point there were several Bashi Bazouks inside the walled cemetery...the dour Russians now with all their forces on the table held on and with a mix of fire and close combat took out all the Turks within their defence perimeter...

A series of vicious close combats in and around the cemetery saw the Ottomans beaten... 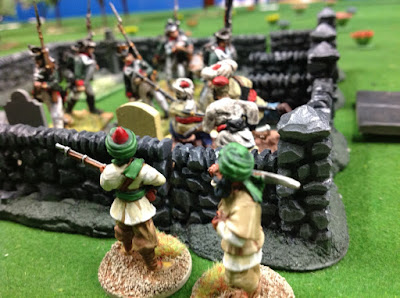 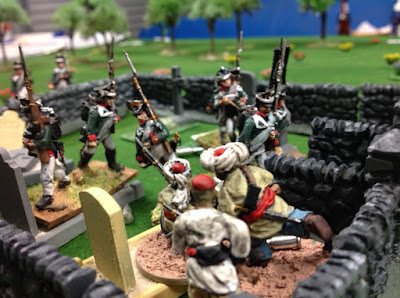 Boluk-bashi Yildiz with his body guard make a lonely site before the Russians...the Turks realised they had been bested! 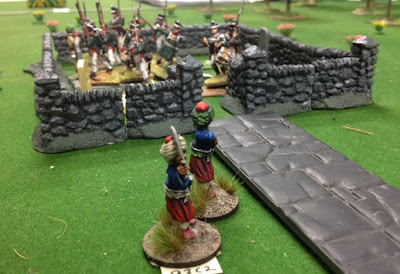 Turn 7 saw the Ottomans reach 10 casualties and their main assault force had been successfully been repulsed by the Russian regulars. At this point we called the game over and declared a Russian victory!

The overall view at the end of the game... 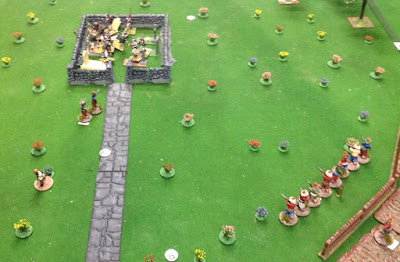 A great game played out resulting in a Russian win. The final casualty count was 10 Turks to 6 Russians.

Song of Drums and Shakos will definitely be rolled out again! Al has promised to put together a Song of Blades Scenario soon too and I've started reading the Song of Drums Large Battle rules so we will have to try them out one night. We all enjoy the system these rules employ!
Posted by Captain Darling at 6:38 pm