Saturday May 28 1932 the angry Marxist, Leftie, Pinko members of the Amalgamated Engineering Union with their recently arrived Bolshevik Advisers advance on of the Police guarding Beaconsfield Park... 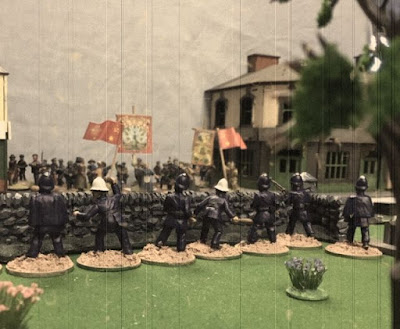 Last Monday night we revisited The Great Antipodean Adventure! We are still using slightly updated The World Aflame rules, these require some book keeping but we find this acceptable as they suit the inter war period well (and so they should having been written specifically for it!). I played this scenario three times before game night and the Cricketers won twice and the Mob won the last game, the events had only a slight influence on the game but added a bit of flavour. Well enough of my waffling lets get into it!

Orders, can’t be changed:
‘By Turn 10 (up to 12 at the umpire discretion) have unchallenged control of the cricket pitch
by having an unengaged Commissar or Banner man/woman on it’ If this is not achieved the
Cricketers win the day!

Note     Banner/Commissar figures are only in play for Morale they can be a casualty instead of a Unit Leader when attached (select with a roll). These figures may redeploy up to 12” when the unit they are attached to is activated, this supersedes the rule where all figures in a unit must carry out the same order. They may detach from routing units automatically when the unit retreats.

The Beaconsfield 1st Eleven & Attached State Government Units
Orders, can’t be changed:
‘Defend the cricket pitch to the last over’

Notes   -All figures have rifles & revolvers.
-Two ATR’s are available. Any Unit may deploy them. Two figures are required to
operate an ATR. An ATR may be ‘dropped’ at any time. Figures may use their
rifles instead of the ATR any turn. Double 1s indicate the ATR is out of ammo, the ATR will automatically run out of ammo when the unit deploying it does.
-Optional Police Section 3 and may split to two

‘Randomly selection’ is done by both players rolling 1D6 and the side with the highest roll gets the card then applies its details (if an individual unit is affected randomly pick one by rolling unless it’s obvious from the card details what unit should be affected).

The Cricketers (behind a barricade at the far end of the table) and Police (behind the parks wall in the foreground) prepared and ready to receive the mob. 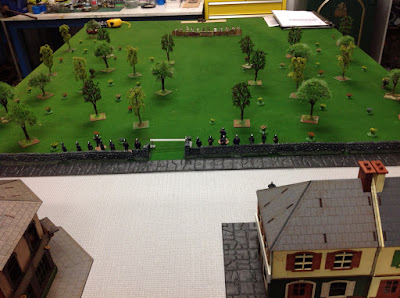 During the first two turns of the game the Police held at the wall and fired as they withdrew,  they managed to get only two hits! 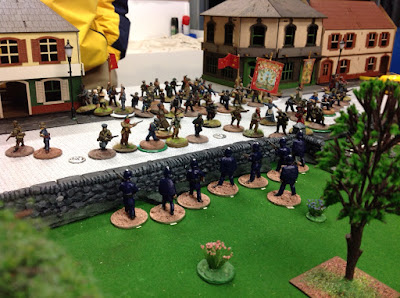 The end of Turn 2 and the Police had successfully disengaged from the howling Mob who started to pour into Beaconsfield Park after opening the official boom gate without permission! 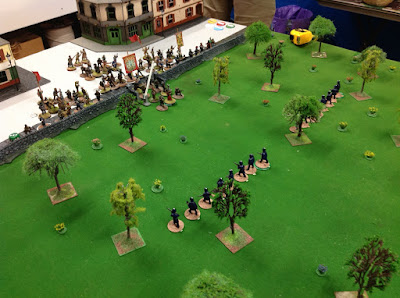 Turn 3 the Unionists on the right contacted the Police and a brief melee ensued which the Coppers got the better of and they were able to withdraw successfully again due to their better initiative... 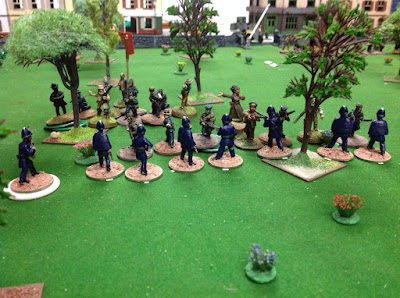 Overview of the 'battlefield' just after Turn 5 started... 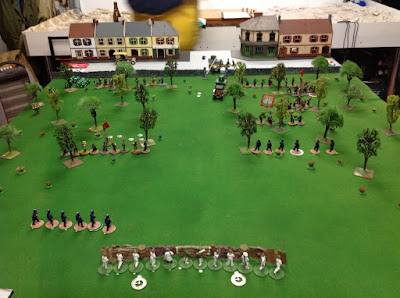 Turn 5 and the Unionist left flank caught up with the police there and they slaughtered them!
(we made a slight blue here as we stacked the Mob figures so they got 2 to 1 attacks along the line where it should have only been 1 to 1 in most cases DOH!) The Cricketers position was starting to unravel as the Unionists numbers were starting to tell! 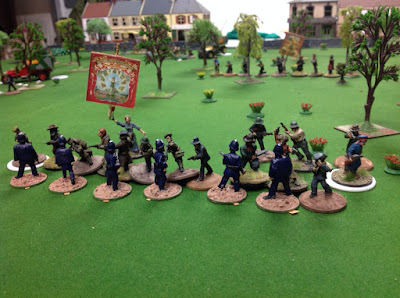 Turn 7 and Senior Sergeant Bill Perks found himself facing the Mob alone!
He roared, "Righty'O you lot, if you disperse right now and egress of the Park in an orderly manner there'll be no need for me to take you down to the Station!"... 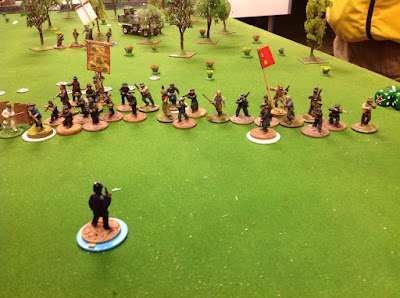 ...the crowd ignored him and was swept aside on Turn 8! 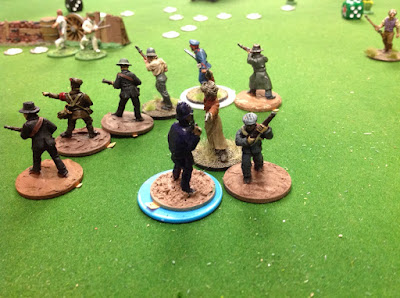 Turns 6 and 7 the Cricketers right continued to slow the Union Mob but due to the ATR's inability to knock out the second of the Unionists Improvised Armoured Car things were beginning to look precarious! We didn't get a picture of the other armoured car running 'into trouble'! 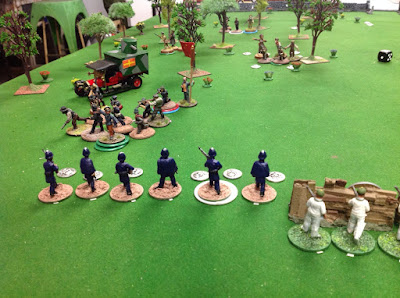 Turns 8 and 9 and the Union Mob's numbers allowed them to flank the Cricketers and defeat them with overwhelming firepower. They captured the pitch, the ammo supply stashed there and more importantly stopped the game of cricket from starting, their manifesto was upheld...for now... 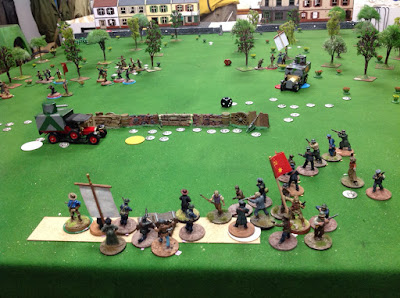 A big win to the Marxist Mob against Conservative Government forces! But the Cricketers will return!

We made a couple of small blues during play as we hadn't used these rules for a while but we already have a couple of scenario ideas so hopefully will return to TGAA soon; the Fight for Fair Education, the university faculty goes militant and the Rise of the Tong, Chinatown becomes the centre of the action!
Posted by Captain Darling at 4:59 pm