An all powerful Sdkfz 10/4 trundles along a road on its way from the Ardennes to the English Channel! 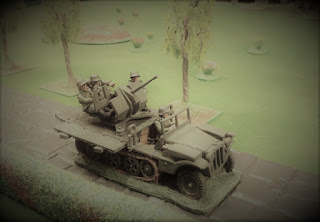 Here's another CoC France 1940 vehicle, this time the Army Group North Miniatures Sdkfz 10/4. I actually picked this model up quite a while ago when War Time Miniatures (not trading at the moment) were clearing out a lot of their 1/56 stuff so it was 'at the right price' i.e. really cheap. When I got my parcel which also included several Italeri infantry sets this got put to one side as with no instructions I had no idea to properly assemble the FLAK gun!

Move on a couple of years and I've looked at this kit again as it would now be of use for my CoC forces. The packet includes a couple of large resin bits, four metal crew figures and a heap of metal bits making up the FLAK Gun and detail parts for the half track (lights, tow bar, window frame etc). The detail is good and all the parts both resin and metal are well cast with minimal flash and no air bubbles. The only thing I noted about the kit contents was including a few more ammo boxes would have been nice as I only got six where most actual vehicle pictures I looked at had ten mounted on the vehicle, I briefly thought of casting or scratch building more but since I built mine with the sides down I didn't as it isn't really noticeable.

The half track went together easily and although I'm not a fan a vehicles with bases it was quite clever how the top of the vehicle fitted onto the base which had the tracks and front wheel assembly cast on it, all very neat and presented no assembly issues. Well done AGN Miniatures. The metal accessories fitted onto the half track easily. The driver has the steering wheel cast with him.

Okay over to the FLAK Gun, I could figure out how the major parts went together but there were a couple of 'gun frame bits' that I had no idea how to fit! I emailed AGN Miniatures and promptly got a return email (thanks Andrew!) with a selection of pictures of an assembled but unpainted model from which I worked out what was going on. Gun assembled!

Pictures from AGN Miniatures to help with the kit.

Painting was easy, a rattle can primer coat, then I sprayed the whole thing grey and picked out the details like tracks, seats and tyres by brush. I use enamels with my old AZTEC airbrush and am using MATT 32 for my German vehicles as I find in this scale MATT 67 (the real Panzer Grey in the Humbrol range) looks way to dark (it suits 1/35 much better)...

I finished up the figures to my best war gaming standard!

My AGN Miniatures Sdkfz 10/4 assembled after a couple of years and awaiting paint! 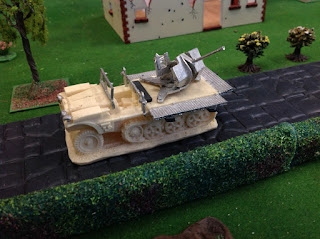 The painted up Sdkfz 10/4, it will get some weathering but I'll be doing that once I get all the German 1940 Campaign stuff I have built up and do them all at the same time... 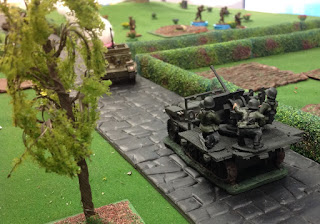 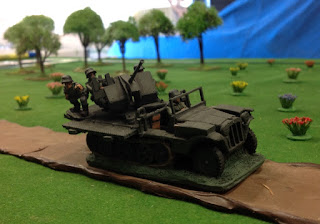 Interestingly this vehicle isn't listed in the CoC 1940 handbook so I'll have to work out which unit types would have deployed it and it value in the 'Lists'. This is even more odd in that the Sdkfz 250 is listed when production only kicked in June 1940 so the chance of them getting to the front line by the 25th when the campaign concluded must have been extremely slim (build dates from the Total Details definitive Sdkfz 250 series of books).

More German and French 1/56 stuff to come soon including a couple of 3D printed vehicles! I have been pretty 'sniffy' about 3D vehicles I've seen on the net so let's see what I think now I have a couple in my hands!
Posted by Captain Darling at 10:48 am