Song of Drums and Shakos AAR #3 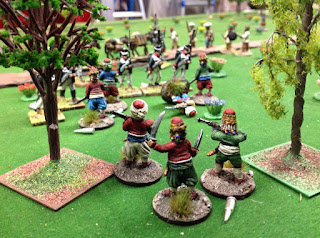 I made a couple of changes to the scenario as written firstly I placed the wagon with a mule train simply because I did not have a suitable wagon and also our play area was 1 metre square slightly bigger than the 90cm square one recommended in the rules.

Below our forces, please note I created my own irregular Ottomans as the ones listed in the Rules Army Lists were of pretty poor Quality (logical for irregulars) and did not have the special attributes that make Bashi Bazouks scream out at me. The change to higher Quality would allow the game to run quicker (also reduced the number of Turks as their value increased accordingly) and the included attributes were to add flavour and try to simulate what I read about Bashi Bazouk soldiers. Also note some of my Ottoman figures are stand ins from a latter period but besides weapons they fitted in perfectly!

June 1810 and Imperial Russian forces crossed the Danube into northern Bulgaria. In August part of this force attempted to capture the town of Razgrad to protect the flank of the besiegers of the fortified town of Shumen. There the Ottomans counter-attacked and in the confused fighting Turkish light troops infiltrated the Russian front line and engaged in numerous vigorous skirmishes with rear echelon Russian units...

Captain Popoff of the Imperial Russian Staff was pleased with his new assignment, he was in command of a small escort detachment bringing vital supplies up from the rear for the Army Headquarters. Everything was going smoothly for his detachment until they heard shouting in Turkish...

The Russians deployed their NCO and four Grenadiers around the mule train and began advancing the mule train first and then the Grenadiers but before they got far the initiative turned over and not wasting anytime the Ottomans sprung their Ambush! 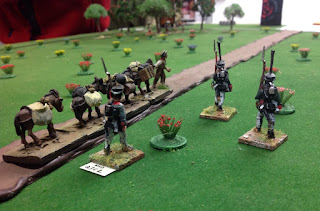 Eight musket armed Bashi Bazouks and their Leader advanced on the right of the mule train while five more armed with Jezails and their Leader emerged to the convoys left! The Musket armed men led by Baler Arslan advanced and opened fire felling a Russian instantly. Meanwhile Berli Yildiz led his men forward to block the convoys advance. Captain Popoff quickly moved his remaining infantry to face the closer Turks forming a line between them and the mules. 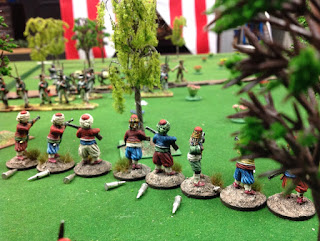 Turn two and Arslan’s men wailed as they charged the Russian before them, killing one, knocking another down and pushing a third back. The other Turks advanced and fired their Jazails with little affect. Popoff’s Russians fought back and held the Turks which in turn panicked a couple of them. At this point the mule train failed to activate leaving it stationary and in danger. 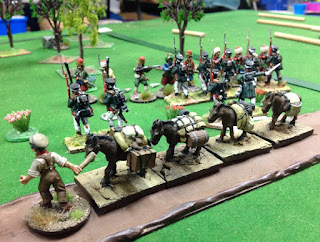 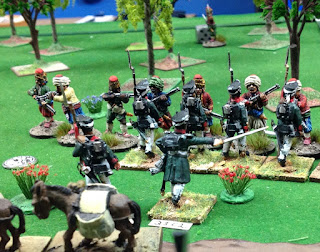 Third turn and while the musket armed Ottomans retired to the woods the others advanced in front of the mule train and shot their driver down resulting in it remaining still again and now a Russian fighter would be required to led it! Popoff now moved men from the right of the road to the left to block this new threat as the other Turks withdrew. 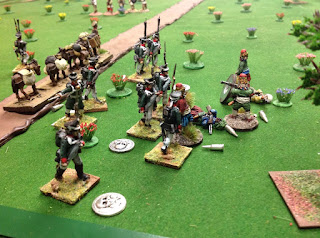 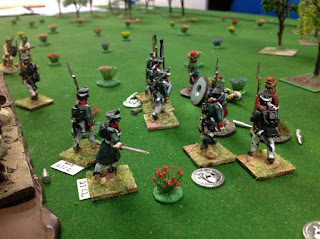 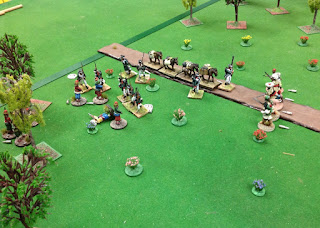 Turn four and while a Russian Grenadier took charge of the mule train (but with no second action to move it so it didn’t move for the third turn in a row) and both sides exchanged fire causing further losses, both were already approaching 50% casualties! 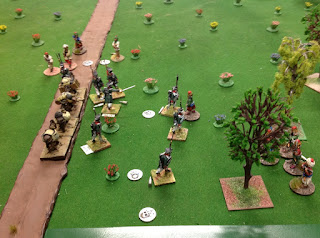 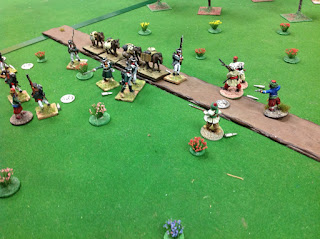 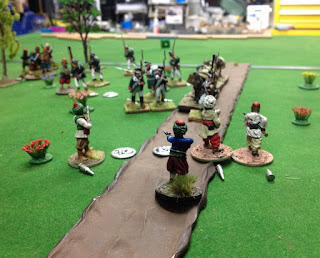 In the fifth turn the mule train finally started moving again forcing the foot soldiers of both sides off the road before it and at this point the Ottomans hit the Russians hard; Yildiz at short range killed the Grenadier leading the mules with his pistol while one of his men shot another Russian infantryman this pushed the Russians to over 50% losses! 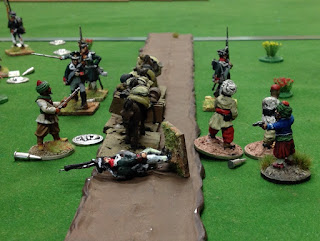 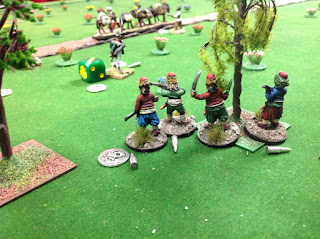 The morale checks saw a further two more Russian run from the play area (including Popoff) and it was all over for them. 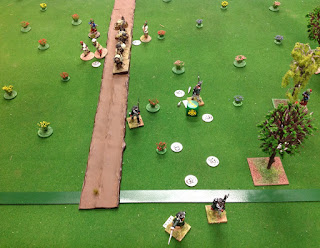 A great game and it was very close and both sides were simultaneously just shy of 50% losses (the Russian stubborn national trait gave them some help here). That the Ottomans had the first chance to strike on turn five and then made good use it saw them take the win. The forces were surprisingly well balanced even though in this scenario the defenders with 400 points of ‘men’ outnumbered the attackers with 330! We’ll be playing Song of Drums and Shakos again next fortnight!

Posted by Captain Darling at 4:56 pm