TGAA - ‘Strangers in the Night’ Scenario and AAR

Back to The Great Antipodean Adventure for our last gaming session. This time with a difference! We have been playing with A World Aflame rules for these games but this time we are going with an updated version of A World Aflame, we have replaced the activation and morale rules with those from Went the Day Well! there'll be more on that later! 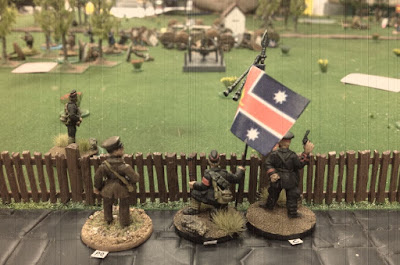 Sunday May 29 saw the whole of the Sydney city centre engulfed in rioting and flames when all the rival factions vying for power clashed! For the first time since the Constitutional Crisis erupted in New South Wales all the groups contesting for control of the State organised rallies in the city centre simultaneously. It was not long before the peaceful protests turned into vicious street brawls and by Noon it was a brave bystander who ventured out as blood was being spilled in running street battles. The fighting raged all afternoon and as evening drew close the tired survivors began to withdraw to their base Suburbs. During this period clashes continued as these determined groups came across each other!

Fig Lane Park was the scene one of those clashes. Colonel Gout's New Guard Company stumbled into the Brown Jackets of the All for Australia's 101st Peoples Battalion, trapped between these two riotous mobs was Senior Sergeant Roy Turner's Constables standing guard at a checkpoint...

Commander: Colonel Gout
Orders, can’t be changed: ‘’Advance across the park to return to a safe Suburb!”

The All for Australia Faction - 101st Peoples Battalion
Commander: Citizen Captain Lightfoot
Orders, can’t be changed: ‘’Advance across the park to return to a safe Suburb!”

The Possible Special Events
These are the events that could occur during the game;

Note - this scenario was adapted from the Men Who Would be Kings rules book.


Both sides entered the fray advancing along board fronts, getting around any flanks was going to be difficult as both sides were required to exit units from the battlefield. the first three turns everyone efforts were directed at gaining as much ground on the opposition as possible.

Turn 3 and the extent of the New Guard advance... 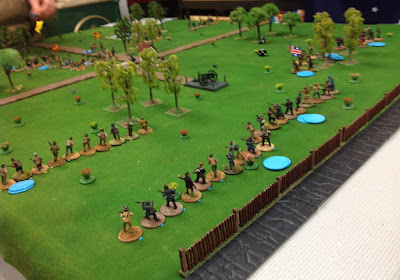 At the same time the All for Australia Force had gained much more ground! 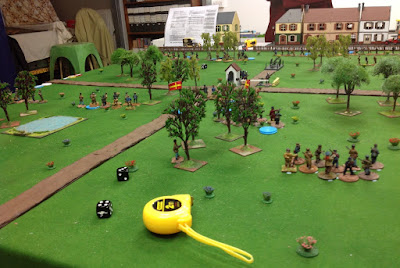 First blood went to the New Guard on Turn 4 as one of their leading units let loose a viscous storm of fire taking down half of the leading All for Australia sides unit!

The first shots are fired! the New Guard are in the foreground, the exchange of fire saw 2 New Guard casualties to 5 for the All for Australia League! 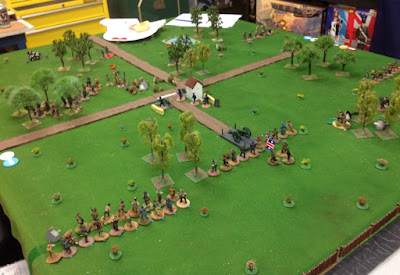 Senior Sergeant Turners 'outpost' totally surrounded by mobs of revolutionaries with strict orders not to engage except in self defence. The results of the New Guard's first volley can be seen in this picture, the bodies of several members of the All for Australia League are clearly visible... 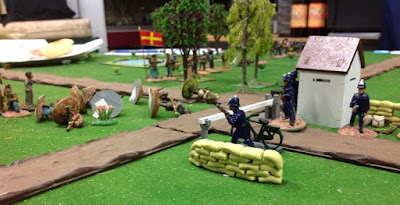 Turn 5 saw a few casualties on each side as they traded long shots. Also during this turn both sides drew men up to Senior Sergeant Turner's position effectively using them as a barrier!

All for Australia volunteers led by a hard core Brown Jacket advancing... 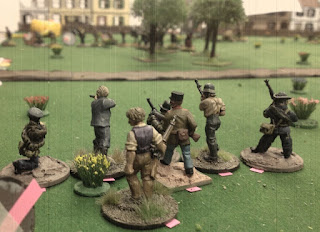 Senior Sergeant Turner's men open fire on the New Guard in self defence the result is devastating for the new guard! 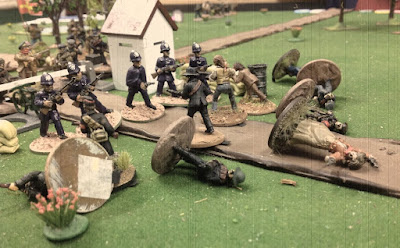 This view of the Constabulary defending themselves shows how close both factions were to Turner's checkpoint before tempers boiled over! 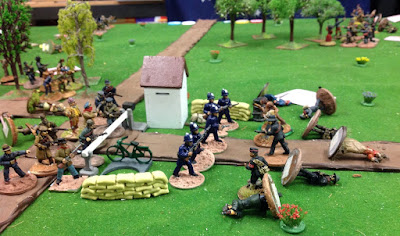 Distracted from their real enemy the New Guard kill all of Turners Constables!
Turner was saved as the All for Australia unit ran passed him to engage the disorganised New Guard in hand to hand the next turn! 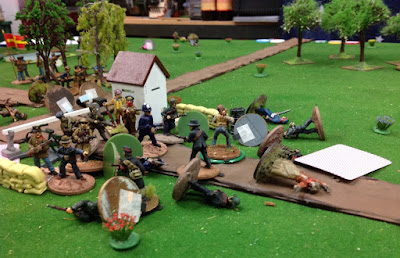 Turn 7 and New Guard section leader Corporal Bruce Smith urge his unit forward and they sprinted for all their worth on the extreme right of the New Guard line. Suddenly they found themselves behind their enemy's lines and looking like reaching their objective!

The overall view of the battlefield at the end of Turn 7. The only intact New Guard unit not retiring out of view to the left is in the foreground between the two groups of trees. Top right of the picture Corporal Smith's New Guard unit can be seen only inches from their objective the edge of the table, All for Australia units can be seen in hot pursuit! Smith had benefited from a random event giving them an extra burst of speed...

Turns 8 though 9 saw the New Guard on the back foot with their rush to the table edge being defeated and the rest of their units withdrawing before the All for Australia storm! They still managed to inflict losses on the Lightfoots advancing force. Both sides men continued to pass morale checks despite taking appalling losses (mental note to me next game don't give these militia forces regular troops morale!)

The fight wasn't going entirely in favour for the All for Australia League, Turn 8 their end run along the table edge was halted by effective fire from the New Guard, the bodies can be seen piling up on the right of this picture! 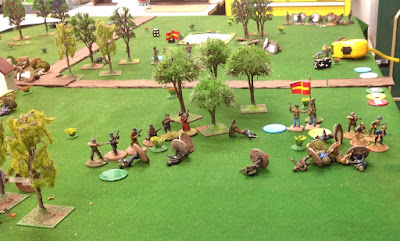 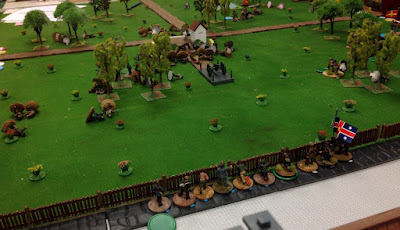 Turn 10 and the New Guard were holding a defensive line along the Park's fence line, in fact they did not have a right flank and Colonel Gout himself was moving his command to cover this spot! The All for Australia 101st battalion was at this point spent itself with several of Lightfoot's units completely dispersed. Only one relatively intact unit made a lung for the table edge but fell short and Lightfoot himself fell to the ground after being hit, he was dead instantly!

The six figures in the foreground of this picture are troops from the All for Australia side just falling short of exiting the table at the end of turn 10, the six figures behind them are from the New Guard trying to stop them! 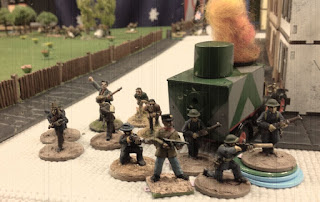 Overall view of the battlefield at the end of the game! 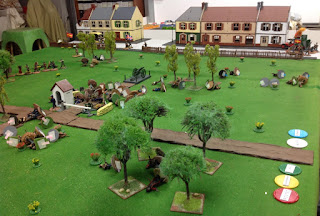 Citizen Captain Lightfoot is hit while crossing the fence to exit Fig Lane Park in one of the last actions of the 'battle'! 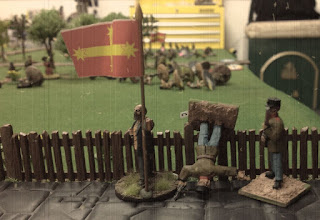 Okay a very bloody draw! The game ended with no winner, not a single Victory Point was scored. Despite both sides advancing aggressively early on and each losing over two thirds of their strength neither was able to exit a unit.


So how did the updated rules work? Very well! Activations ran smoothly creating  interesting actions and reactions and some tension! The new morale system tested well but still needed tweaking to suit. We discussed these further refinements to the morale and they will be in place for our next Great Antipodean Adventure game. I'll go through our new Frankenstein set of rules in a separate post and the reasoning behind the changes! Suffice to say now these revised rules are looking good for our future Great Antipodean Adventure games!
Posted by Captain Darling at 3:16 pm 1 comment:

TGAA - An Armoured Car for The New Guard!

I've been banging away at another Improvised Armoured Car for the Great Antipodean Adventure campaign this time for the New Guard, mind you these vehicles are interchangeable between factions as they can easily be captured during the street fighting!


Two period photographs of Colonel Philpot and other members of the New Guard posing by their new Improvised Armoured Car early in the morning of Sunday May 29 near Fig Lane Park... 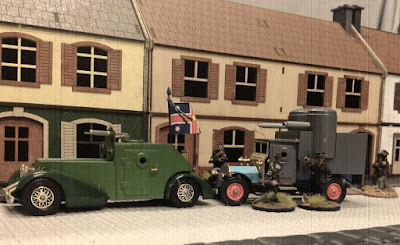 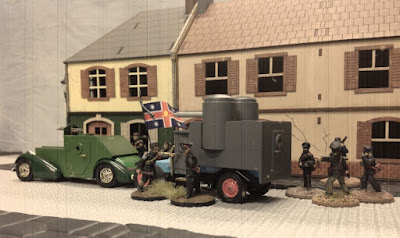 With the appearance of various Improvise Armoured Vehicles in the streets of Sydney the Leaders of the New Guard believed they need their own Armoured Vehicles, they also wisely acquired several Anti-Tank Rifles off the arms market to counter other factions vehicles! The New Guard's agents approached the Randwick Tramways Workshops regarding constructing an Armoured Truck for them. They declined as the Workshop was already overextended maintaining the Tram fleet and producing other groups Armoured Vehicles. Not to be without such vehicles the New Guard met with management of  the Meadowbank Manufacturing Co who were only to happy to divert a few of the workers from their rolling stock production to upgrade a truck for the New Guard albeit at what the New Guard leadership thought was an exorbitant price! Using a photographs of a twin turreted Russian Armour Car for inspiration the railway draftsmen drew up plans that the rail workers quickly turned around using a Crossley Truck for a drive train. The armoured box was spacious and also encompassed the divers cab, it had two doors for easy access. Each turret was armed with a Vickers Machine-gun and was geared to be manually rotated with a crank handle. The construction was rust proofed and painted grey as that was the paint they had the most of in stock! The initial test vehicle was delivered to the New Guard on Saturday May 28. The New Guard announced that trials would be carried out the next day and an order for six more vehicles would be placed with the Meadowbank Manufacturing Co if they were considered a success...

The base for this A/C was an like one of my others was an old Matchbox Crossley Truck, the Lowenbrau one, I kept the roof and barrels as this conversion is meant to be reversible (also the barrels could be good scenery in games when not on the truck 😊). The build just like the other A/Cs for this campaign was pretty straight forward. I used styrene sheet to create the main rear fighting box and cabin cover. This time I made the turrets full length out of plastic conduit pipe with a goggle eye as a top to give a domed look as they protuded from the side of the armoured box. A coupe of port holes and handles were added using washers and a paper clip. Lastly the MGs were made with lollipop sticks and coat hanger wire as I have done with many other projects! An 'armoured plate' was cut out so it could be placed to cover the front of the radiator. The whole thing was painted using rattle can grey primer paint. 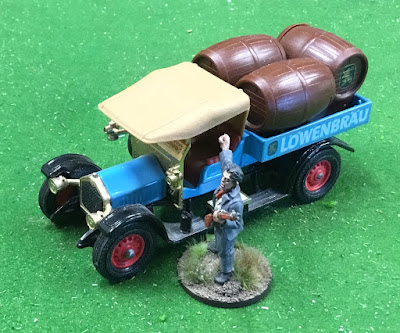 The armoured section built and ready for paint... 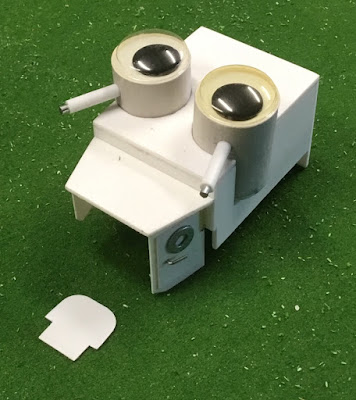 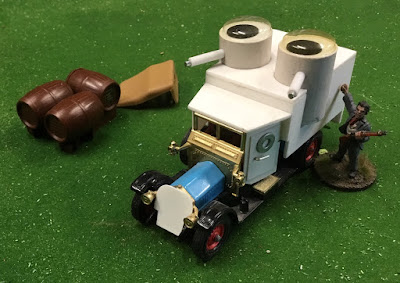 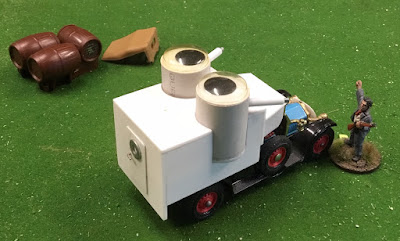 The completed vehicle and diorama set up... 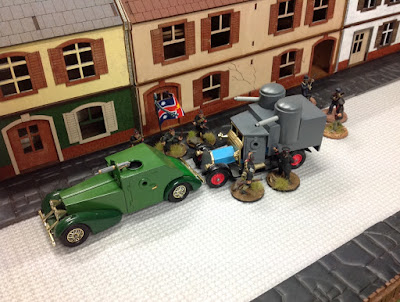 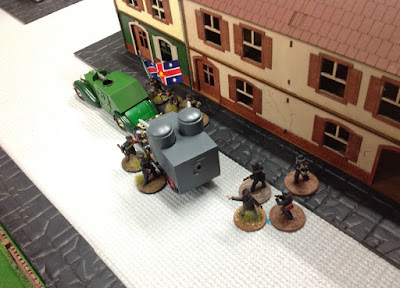 Next time I will discuss a change in rules for The Great Antipodean Adventure! We're not ditching The World Aflame Rules because as I have previously said it has great features for this period but we are changing just the activation sequence and morale rules!
Posted by Captain Darling at 1:08 pm 4 comments: