Well I've had the Blucher rule book sitting idle in my bookshelf for almost 2 years now so I supposed it was time I rolled these rules out!

I decided it was best to start with an umpired game to help speed up rules checks and explanations nothing worse than trying to play a game while thumbing through rules continuously! I picked for our introductory game a well designed scenario is available here...

the Battle of Raab, June 1809 between French and Austrian forces. 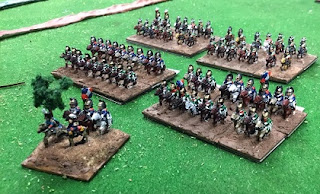 The Archduke John  on Szabadhegy hill...sharing a beverage with his staff??? 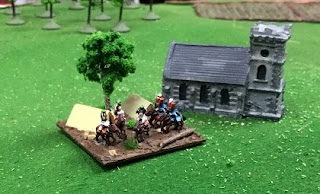 Before play I needed to create a road network, extend my river/stream segments and make a couple of built up areas to represent the town of Szabadhegy and the fortified farm of  Kismeyer...

That done we went for it, our game did not really evolve as the actual battle did, I kept the details of the battle back from the players to see how they would handle the situation without any preconceived thoughts...both sides started with all their units concealed to increase the fog or war.

The below video lets you see how the actual battle played out.


Below is how our game went, the blue units are French and the yellow ones are the Austrians. The objective of both sides was to control  the town of Szabadhegy and the fortified farm of  Kismeyer at the end of 25 turns or break the opponents force. The Austrians began defending the two BUA's and located behind the Pandzsa Stream with a central reserve, a strong position albeit with not so good troops. The French have infantry on their right and centre and cavalry on the right, they are scheduled to receive reinforcements at the end of turn seven. The solid arrows are the units opening moves and the outlined ones are the French final pushes. 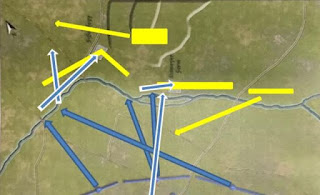 The first turns saw the French advance all their forces. They moved their cavalry from their right flank all the way across to their left one to support the infantry of the XII Corps while their strong central VI Corps composed of infantry only moved directly forward. The Austrians even though defending reacted boldly and launched their cavalry forward across the Pandzsa!!! This picture shows this the French mass deploying to their left flank in the centre/right and in the distance you can see the four Austrian cavalry units crossing the Pandzsa... 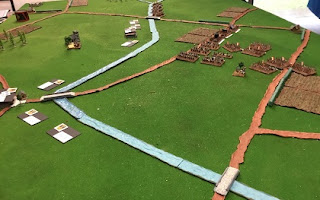 The game developed with the French left flank pushing forward while the great Austrian cavalry charge had the unexpected result stalling the French advance on the Kismeyer farm as half of the infantry of the VI Corps halted to form up defensively! Also this bold move extended the Austrian field of view so when on turn 8 the French reinforcements arrived they immediately lost their concealment rendering them unable to carry out Reserve Movement. 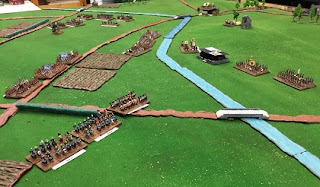 The Austrian cavalry then  moved en mass to charge the still advancing infantry of the French VI Corps! 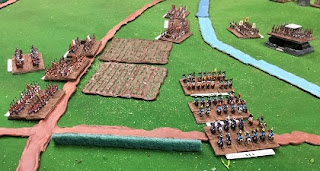 Ah the original Dice Shako in action! Both players really had to consider their activation's and in general were conservative so many 'pips'were lost! 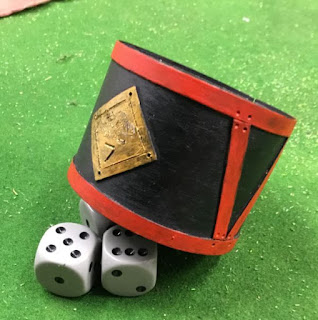 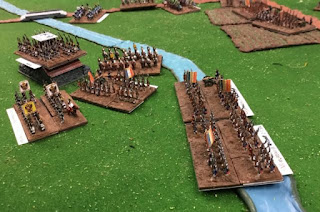 The French with cavalry from their reserve cleared the Austria mounted horde from their centre and launched their first albeit unsuccessful attack on fortified farm of  Kismeyer... 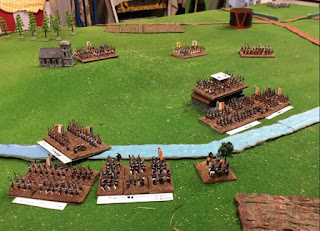 Meanwhile on the French left despite a wild charge by the Austrian Hussars of Besan which delayed them were able to successfully out manoeuvre the Austrians with the support of their Horse Artillery. This left them in a position to attack the town of Szabadhegy late in the game.

Turn 24 of 25 saw the Austrian hanging on by a thread. They still held the town of Szabadhegy and the fortified farm of  Kismeyer. Casualty wise they had started the game with 15 units so five would break their army and they had lost four, also they had retired four units so they were almost on their limit there too!

The last turn saw the French attacks on both the town of Szabadhegy and the fortified farm of  Kismeyer successful so they clinched victory in the nick of time!

The French occupy the town of Szabadhegy... 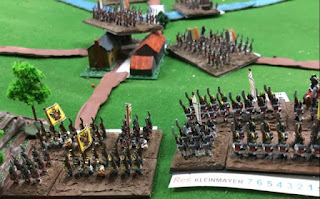 and the fortified farm of  Kismeyer... 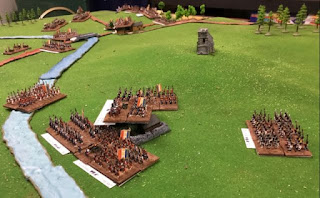 History repeated with a French victory! It was an enjoyable game! Also a very good scenario but in favour of the French, this game was a bit more even as neither player had any idea of the actual forces of battle and the Fog of war was a good leveler! We missed a few subtle rules but none that would have affected the outcome. All those involved thought that even though not the most detailed set of Napoleonic Army/Corps level rules around they deliver a good game in ea reasonable time with a very good feel for the period! We'll definitely revisit Blucher, in fact the players thought a replay of the Battle of Raab scenario would be well worth it!
Posted by Captain Darling at 5:57 pm No comments: