Song of Drums and Tomahawks AAR

Posted for George, it was a good gaming night!

The Last of the Moccasins
An After Battle Report for Song of Drums and Tomahawks
(For two eastern woodlands warrior forces, some agriculturally minded women, and a score of village youths)
(with accompanying whooping noises)

Along time ago (Monday night) in a war games genre lost in time (the beaver wars) in a location so remote that it doesn’t appear on any maps of North America (Plympton) the early morning  dawn cast its rosy fingered glow over a small Miami village.

The sachem of the Seneca had received intelligence (probably through some of that peace pipe smoking) that a Miami Village nearby could be vulnerable to a raid as their warriors were all preparing for a big hunt. Gathering his tiny but tigerish force of young initiates and Not so young Warriors he set out to win fame glory and possibly some new neighbourhood watch friends.

Approaching through the broken terrain he Noted the women doing womany things in the field, the children and young men doing things to each other near the camp, and little or no evidence of any warrior defenders at all. The only thing of concern was some bloke dressed like an eagle.  Confident that this could be the easiest raid yet he stared at the distant figure of the woman known in the valley as orenda of the big breasts and wondered how he was going to sneak her home past his existing main wife. Splitting his force into two groups under himself and his war leader achak he led the men and boys towards the village…In Indian file surprisingly enough.

Things immediately went gourd shaped as the right-hand group under achak became bogged down in reeds, broken ground, and difficult undergrowth. Sachems main group was faring little better as his warriors seemed to forget how to move through the undergrowth at all. He ordered some youths to crawl forward so that contact could be established. The eagle-eyed Miami scouts immediately spied achaks rather inept attempts at attacking from a concealed position and opened fire with bows and the odd musket (not to be confused with an even musket or an even dozen). Though ineffective it drove the Seneca further into cover.

Wahta the shaman took control and barked orders about the camp. Given he was dressed as an eagle some of the women wondered why he was barking…but chose not to query such details as they had to concentrate on getting back across the stream. Wahta ordered the young men into a firing line in front of the camp while sending several boys across the stream to allow the women to escape. He correctly deduced that the Seneca would be moving in two groups even though the second had not shown itself yet.

The women in the fields started back toward the camp arming themselves as they went with scalping knives and large gardening implements.  More of this later in the story.

In the far distance kitchi and hadawako the two Miami war leaders heard the gunfire and turned back from the hunt. They urged their small but experienced party onward hoping to return before too much damage could be inflicted.

The race was on.

On the right, movement was still being held up by boggy ground, reeds, shrubs, the bad omens of the dice gods, and the  inexplicable ability of a young Miami youth soon to be called musket boy to avoid any and all objects of the missile variety slung in his direction. Defending the Ford Crossing he seemed to  jeer at  every attempt to bring him down.

Singing ‘I’m musket boy, I’m musket boy, I’m not afraid, your weapons are toys’ he danced on the bank of the ford. Being harsh critics of ad lib song composing the Seneca redoubled their efforts to bring him low…but to no avail. Several of the youths moved across the stream to cover the women as they fled across the fields. Wahta realised it was all taking too long as the Seneca closed through the scrub. Sporadic shooting resulted in several wounds but no real damage.

Despite the urging of gallantry tempered with caution, one youth raced across the path into the clearing to engage a full blood warrior hand to hand. With one mighty backhand swing the youth was struck from his feet and his blood mingled with the dust of the field. Watching in horror a new sense of revenge girded the Miami loins…along with the realisation that a huge difference in stats could see all of them mingling in the dust.

A Seneca brave overcome with blood lust surged from the line to claim the scalp of the recently departed Miami youth. He plunged forward ignoring everything in his desire. He was knocked down by fire from the Miami line.

Desultory fire was directed at the youths by the camp. Several were knocked down but no serious wounds were inflicted. Wahta knew he must hold out until the hunting party returned.

Miraculously or so it seemed; after much running kitchi urged his men into the clearing and formed a rough firing line shielding the village from the advancing Seneca. They had arrived in time. Not knowing the true size of the raiding party he urged his men to fire calmly and to fight as if this were the end of the world. His men caught the odd word of his rousing speech; several wondered what he meant by ‘fill up the breeches with our English dead”…. Mainly because the enemy were Seneca and more importantly because almost no one was wearing breeches due to the the rather warm weather.

Exhorting his men to ‘shake a spear’ (an old Miami battle encouragement line) a rippling rain of musket balls and arrows ploughed into the Seneca lines; men slumped to the ground, some dead, some dying, some merely trying to find cover to avoid the vengeful Miami fire. One brave launched himself through the maelstrom directly at the Miami sachem who clubbed him to the ground mercilessly. Resisting the scalping urge he shouted encouragingly to his troops “thus perish all who seek to destroy and enslave our people”.

It was a good line but “di(ga) tilvsdi” (‘let’s get em lads’) rolled off the tongue better so the leading warriors screamed that instead….it made little difference as the Seneca didn’t speak Miami and probably wouldn’t have cared about the intended sentiment even if they did.

His men surged toward the increasingly hesitant Seneca line.

On the right the Seneca cleared the obstacles and had some women clearly in sight ready for hostage taking. They ran swiftly past musket boy heading for the ensuing women. Musket boy retreated back toward the village. One Seneca warrior positively glowing with exuberant masculinity broke though and confronted one of the slower women. His intended prize turned like a frightened deer in the fire light…and smashed him senseless with what appeared to be either a large cooking pot or a two-handed scythe. He didn’t really get to identify which as he passed from this world without reaping his prize. As is the way of savages everywhere the woman set to work to claim his scalp as a prize. She was joined by one of the other women who thought it might look good over the window lintel and had a sharper scalping knife...because trying to scalp someone with a scythe is a tough gig in anyone’s book.

Another youth had taken musket boys place at the ford and accounted for an ill-advised charge by one of the less skilled Seneca. However, he was in turn felled by the Seneca war leader; who immediately felt the scalping lust rise in him that made him oblivious to everything except bringing back a prize (at this stage any prize at all would be good). One last warrior tried to recover the body of his comrade currently experiencing the Miami equivalent of an extreme short back and sides. With one great whoop he attempted to fall on the stooped Over women: and was swiftly felled with the aforementioned dangerous scalping knife. Whoop and stoop soon became poop and scoop encouraging the women to start signalling across the stream for the others to join in the fun.

The right wing had realised the situation was hopeless and started to break off before the rather nasty women could get an opportunity to break off anything else. Pursuit was relentless by both the women and youths on that flank. Retreat was equally relentless and mercifully fast.

In the centre the situation was equally hopeless but with more bodies.  The Seneca were slowly being squeezed in a huge vice…a Miami vice. The war leader dodged fire to get a good look but could only see two or three warriors following him from the field. The warrior with the scalping lust from earlier managed to get his prize but was immediately surrounded by whooping savages.
His fate did not look promising and probably did not include making it home for dinner.

This was a disaster. No saga could be written about this. In fact the less people who knew about this debacle the better. Given his force had been reduced by nearly half…the Seneca war leader realised that fewer people did know about it. The chances of even fewer people knowing about it before their return to the village was very high…in fact at one stage it looked like no one would know about it.

Around the Miami campfires that night it was agreed that the luck of the gods had got the hunting party back at the earliest time they could arrive. By keeping their order and placing themselves where they did, they were able to outfight the main Seneca battle group.

Wahta had organised his meagre resources well; the youths were brave and their fire accurate, and the women vengeful. The gods had smiled lovingly on the village resulting in the Seneca getting bogged down on the right flank. This allowed the youths to get between them and the women and exchange fire.

At the Seneca camp that night the conversation drifted inevitably to the subject of who would be the next war leader once the current one departed for a long holiday at Niagara Falls. Someone commented that the current war leader was to dice rolling what Herod the great was to the Bethlehem child care association. Hardly anyone understood the reference but they did understand that the whole affair was an abysmal display and shouldn’t be spoken about again.

And in the way of warriors everywhere discussion turned to the appropriateness of the rules of war…the sun set as it always seems to do, drinks were drunk, food was chewed, and talk turned to the next test of strength in the future….and things best left forgotten started on the inevitable process of being inflated into super heroic deeds…as is the way of the warrior. 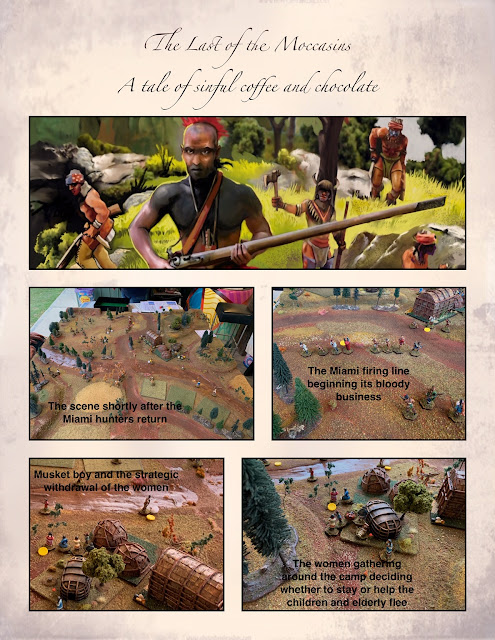 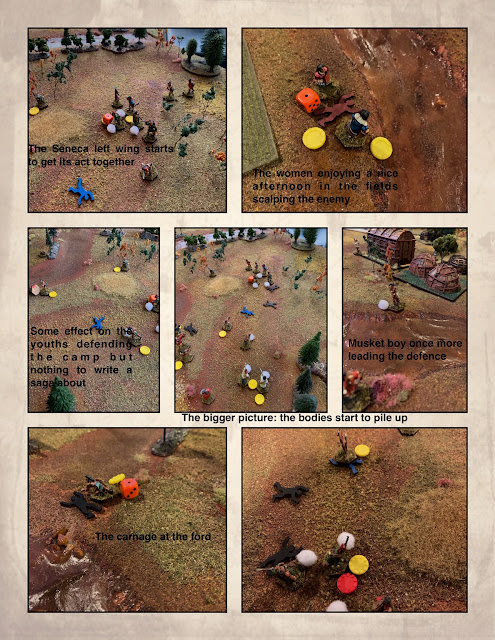 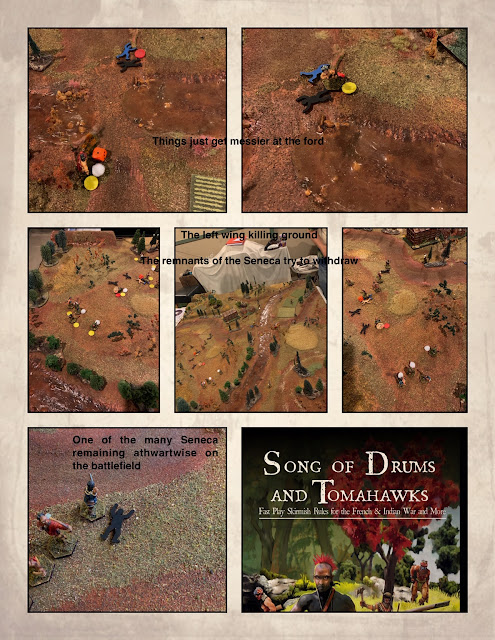 Posted by Captain Darling at 11:35 am

Email ThisBlogThis!Share to TwitterShare to FacebookShare to Pinterest
Labels: 28mm, AAR, Song of Drums and Tomahawks