Speaking with another TSOGer yesterday (Saturday) morning he revealed he still hadn't found his old diecast cars for Monday night and wasn't sure where they were I thought I'd better have a second car ready in case... 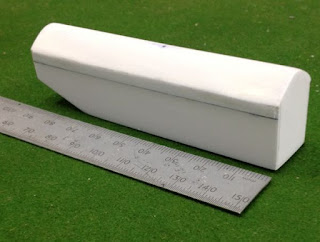 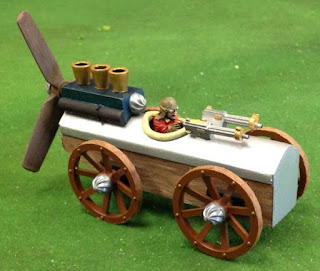 
I decided to go with the WW I fighter look so I formed 7 pieces of flat styrene into this. I glued the 6 1mm flat faces together with a couple of braces and the glued a 0.5mm piece to the right side. Once it set I curved it over to the left glued it and clamped it in place. 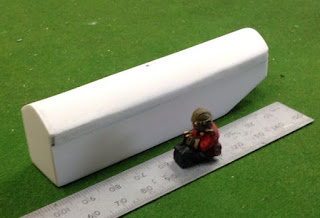 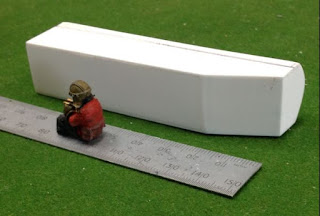 Once that was done I made an engine block from sheet styrene added some Lego Speaker Horns and a couple of 1/35 Panther bits to it for character. I gathered some Lego Wagon Wheels, Decretive Caps and a Propeller and a TOBSEN77 Pilot and 2 HMGs and prepared them to be added to the body. 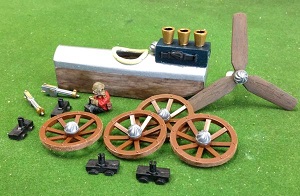 Back to the 'fuselage' I cut the Pilots Position out with the trusty Dremel and painted the body with wood side panels and silver metal work. I then lined the edge of the pilots position with some Milliput to represent the protective padding. 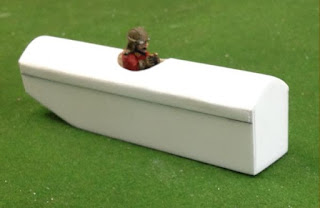 Next I assembled the bits... 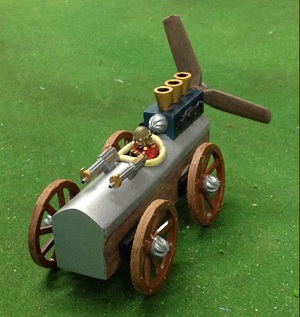 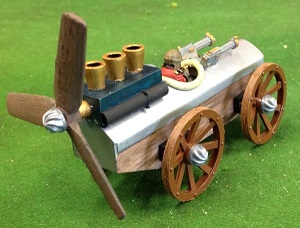 Well here it is all finished in luxurious British Green with Gold Embellishments the Armoured Jalopy all ready for a run using the Mad Maximilian Rules... 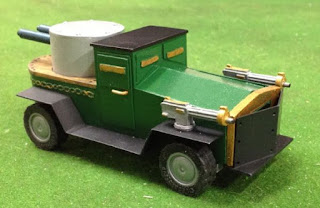 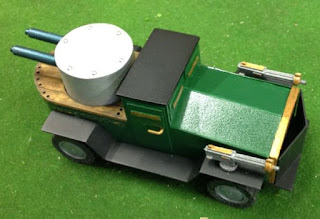 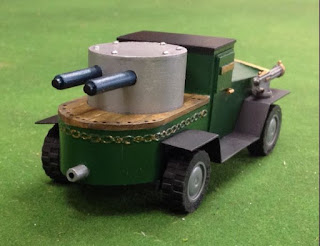 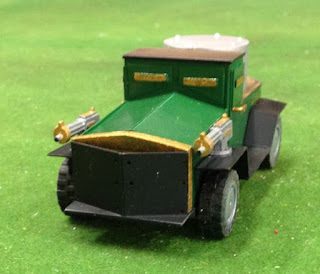 Its scratch built from my usual stuff (styrene sheet and PVC pipes) but I have used two TOBSEN77 HMGs and the wheels are Lego ones, they're not perfect for the period but the Rolls Royce A/C of the 1930's had solid rims so I'm happy plus the Jalopy rolls smoothly hmmmm...the build was fast so the doors, vision slits, and radiator aren't quite as detailed as I would like but I think pretty passable...anyway I hope you like it!

Okay since TSOG are going to do some play testing of the pulp car fighting Mad Maximilian rules I'm gonna need a 'ride'.

I've had a first look through the rules and seen the pictures of the intended cars (sort of 1930s styled sleek art deco Grand Prix types) and decided to go with the Rolls Royce A/C, Bolton Paul Defiant  & Pick Up Truck amalgamation sort of thing!

I got the approximate sizes of the supplied cars  and spent some time last night drawing up details blue prints (hahaha) and today cutting and gluing styrene and PVC pipe....


Here's a picture of my detailed plans with where I am up to at the moment... 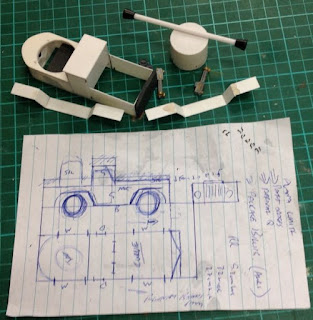 And a couple more pictures from different angles... 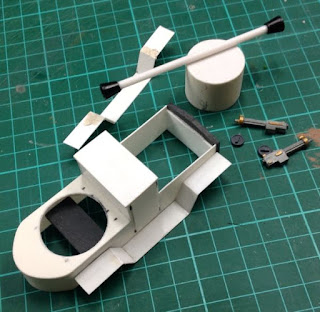 I'll go with Lego wheels most probably as they are easy to get and cheap. The MGs are from Tobsen77 and will be mounted firing forward like a WW I fighter. The rotating turret behind the armoured cab I think will have one (maybe two) rapid fire 20mm cannons. More details on specs as I complete the build.
Posted by Captain Darling at 6:20 pm No comments:

Song of Drums and Shakos AAR

The forces we selected were:

Battlefield and figures ready for action 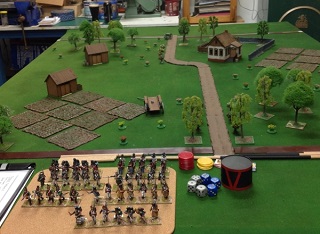 Remember the object of this scenario is to locate the position of some vital top secret documents and get them from the table top while inflicting casualties on your opponent!

We began after a rudimentary run through of the rules.

AAR
The French Dragoons on the right due to good activation rolls quickly advanced though the walled field behind the farmhouse and checked out the first of the four potential document sites without luck while the regular French infantry and the British were slowly advancing! 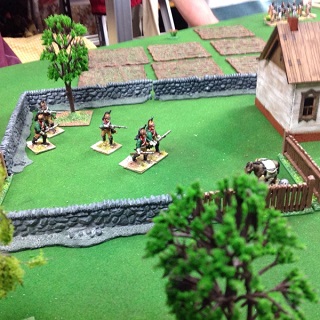 The French Infantry plod forward the Dragoons are behind the house on their right ... 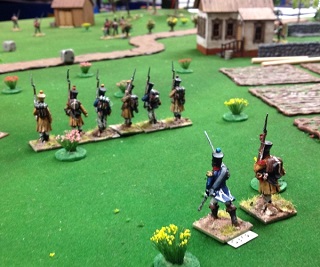 The British Infantry advanced to face the French Dragoons while on the British right the Rifleman scurried forward.

The British Infantry and French Dragoons exchanged some desultory and ineffective fire while the British inspected the second potential document site also with no success.

British Infantry and French Dragoons exchange shots!
I wouldn't be surprised if there wasn't a bit of taunting going on too...
Oh the red poker chips indicate the figure's weapon is unloaded. 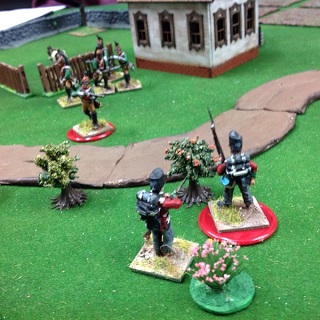 Overview of the Battle the mid game the French Dragoons are just out of picture to the left.
British Infantry are on the left, British Riflemen are on the right and the French Infantry near the top. This is before all forces concentrate on the last two possible document locations which are also to the right of the picture: 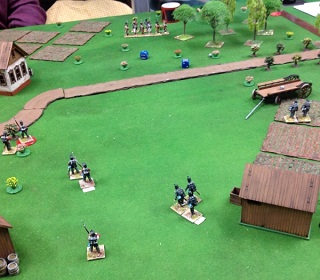 At this point the forces all converged toward the last two potential document sites on the French left/British right.

A few more pretty ineffective shots rang out across the battlefield there was a single British casualty thanks to a volley from the French Infantry. Deadly close combat then ensued as the forces engaged around the last two potential document sites. Initially the French Dragoons had the better of their opponents but the British fought back with a vengeance and soon four out of five Dragoons were out of action.

Meanwhile the French Officer had located the documents and despite a last minute lunge by a British NCO he got into the open and was ready to make for the board edge. The French weight of numbers then started to tell and they tied up the British basically giving their Officer free passage to get the Documents back to the Imperial Headquarters. The British Leader fell at this point and the ensuing morale rolls left all but one of their men skedaddling!

The melee 'stage' begins a handful of Dragoons take on all the Brits while the French Infantry apparently enjoy Gauloises and Red Wine as they inch forward! 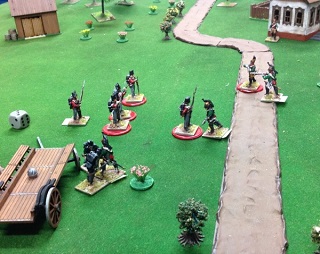 The 'BIG' melee! The French Infantry get into the action! 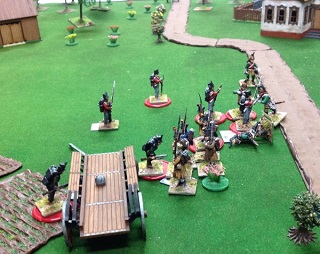 Positions at the games end The French Captain is heading for the Imperial Headquarters while the Brits flee tails twixt their legs! 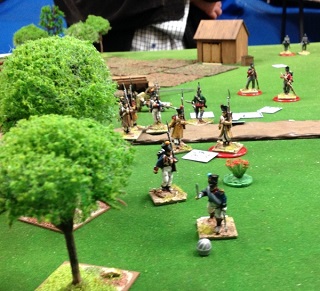 At this point we pulled stumps and the game was over.

The result was clearly a French Victory!

Well done Dave and Alan! Stu and I were given a damn good thrashing...

We were finished in under two hours about what I expected with players new to the system involved. I was actually hoping it would be quicker and we could get a second game in boy was I wrong. At some points the game dissolved into chaos as rules were pulled apart and activation  status and rolls were discussed over and over and over again. I lost it at one point as I was there to play a game and have an enjoyable time not dissect a set of rules mid game and I openly apologise to those there but hey everyone get into the groove and play. Rules discussion is done once a games finished it’s what the post game drinks and chat is all about. Anyway I doubt these rules will surface again for one our TSOG nights I’ll happily use them one on one or for solitaire games as I think they’re cool, a pity really.

Next fortnight we’re going to be play testing a new set of rules, Mad Maximilian!
Posted by Captain Darling at 8:34 am 5 comments:

Email ThisBlogThis!Share to TwitterShare to FacebookShare to Pinterest
Labels: 28mm, AAR, Song of Drums and Shakos

It's Napoleonic skirmishing this fortnight and we're using the Song of Drums and Shakos rules. One side will be the French (derrr) and the other one of the members of the Sixth Coalition. On each side one player will be the force leader and the other his second in command. Each player will control 5 to 8 individual soldiers. I
The Situation...
1813 Europe....
Whilst the armies of the Sixth Coalition manoeuvre against Imperial French forces a Divisional Officer inadvertently mislaid vital documents he had received from the Allied High Command. The Brigadier realised he had lost the secret papers soon after his soldiers had departed from their over night encampment. Anxiously he sent a select group of troops to recover his satchel and the important orders. They scurried off with haste to carry out their orders...
Unbeknownst to the Brigadier one of Fouche's (French Spy Master) agents overheard his plight and sent the information of to the commander of Napoleon's nearby units. The French General on receiving this intelligence deployed a small unit of volunteers to investigate the reports validity and if the said documents exist procure them for France, he believed they would be invaluable to the Imperial cause...
Victory points are allocated for casualties and getting the secret documents! Goes without saying highest score wins. These rules are fast playing but we have two first timers so it'll be interesting to see how long it takes to play the scenario. The AAR will follow soon!
The French will have two force selections to pick from:
Option 1
Officer 60pts
NCO 56pts
Drummer 16pts
2 Voltigeur 66pts
8 Line Infantry 208pts
Point Total 406
Option 2 - think we'll start with this the Dragoons add some variety!!!
Officer 60pts
Dragoon NCO 42pts
4 Dragoons (on foot) 144pts
6 Line Infantry 156pts
Point Total 402
The Allies can select of one 'section' from one of three nationalities:
Russia
Officer 60pts
NCO 56pts
4 Grenadiers 128pts
5 Line Musketeers 150pts
Point Total 394
Austria
Officer 60pts
Grenzer NCO 70pts
4 Grenzers 180pts
4 Line Infantry 96pts
Point Total 406
Britain
NCO 46pts
Rifle NCO 84pts
4 riflemen  188pts
4 line infantry 104pts
Point Total 422
Picture of the pool of available troops with the 'battlefield' in the background... 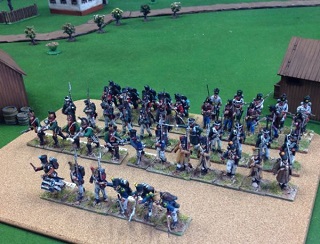 Posted by Captain Darling at 6:39 pm No comments: